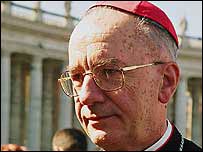 No, Benedict didn’t congratulate and reward Bishop Gerhard Müller of Regenburg for transferring an abuser, but it didn’t seem to make any difference to Benedict that Müller had done so.

The Bishop of Fulda, Heinz Josef Algermissen, said his colleague Bishop Gerhard Ludwig Müller of made a mistake in offering a second chance to a priest with a history of pedophilia.
“If something has happened in the past with children, a new start should only be allowed at a distance from children,” Algermissen told the Bayern2 radio station.
The priest in question, identified only as Peter K., was found guilty in 2000 of making improper sexual advances toward a minor and received a 12-month suspended sentence. Müller reassigned the priest to the parish of Riekofen, a village near , after that sentence expired.
Police then arrested 39-year-old Peter K. on Aug. 30 for suspected sexual offences committed between 2003 and 2006.

Note that these latter offenses occurred after the firestorm of news about sexual abuse in the , and that a law enforcement official had strongly recommended against reassigning Peter K.

The German bishops had promised not to reassign pedophiles:

In 2002, the German bishops acted to head off such a crisis, with the Conference of Bishops issuing guidelines on pedophilia. The needs of the victims were to have priority over the needs of the accused priest. Those rules say former pedophiles must not be employed in posts where they may have contact with children.

Müller seems not to have heard of the principle of contradiction:

Müller has denied breaching the guideline, saying he had a Christian duty to forgive and had been convinced that the paedophile priest had reformed his ways.

“Even a bishop can’t rule out the possibility of a priest misusing the freedom [of his position],” Müller said in an interview with the Catholic news agency KNA. “Priests are not marionettes. They themselves are responsible for what they do with parishioners.”

The washed its hands of the matter:

“It’s a German matter,” DPA news agency quoted a source within Radio as saying. “The bishop will have to justify his behavior to his fellow bishops.”

But of course his fellow bishops can do nothing; only the Pope can discipline a bishop. Eux-tv reports:

Cardinal Karl Lehmann, chairman of the Conference of German Bishops, said the national body could not do more than establish guidelines and ultimate responsibility was with the dioceses themselves.

But the diocese, like so many American ones, didn’t care:

The mother of two boys molested by the priest in 1999 charged that diocesan staff had failed to help the victims, adding: ‘It’s a scandal that this bishop won’t admit to any fault. They don’t care about the children.’

Benedict has acted against abusers, but he has not disciplined this bishop (or any other) who tolerated and enabled abuse. Instead, Benedict congratulated  Müller and appointed him to the Congergation for the Doctrineof the Faith, which also judges priests accused of sexual abuse. Bishops around the world notice.

Marriage not a Cure for Sexual Abuse

Gerald at The Cafeteria is Closed has made some comments on my book. He thinks that having some married clergy would help remedy the situation.I am less certain. Certainly celibacy creates a culture in which many or most clerics have sexual secrets: affairs with men or women, abuse of boys or children (rarely teenage girls, for some reason). But churches that allow married clergy have similar problems, as I document in the book. Married clergy not only have affairs with laypeople but abuse teenage boys and girls. Male clergy are the usual culprits.Men seem to get a greater thrill than women do from sexual transgressions – almost all perversions in the long lists that psychologists make are done by males, not by females.As a man, I find this troubling. Perhaps it is misdirected aggressiveness, which is definitely more present in men than women.But whatever code a church espouses, a male clergy will get a thrill by violating it. A Catholic priest can transgress by secretly marrying, a minister of the , the gay denomination, is still not allowed to touch boys – but they do.

The Latin Church may someday follow the example of the Eastern Churches in allowing married clergy – but preventing sexual abuse should not be the motive.