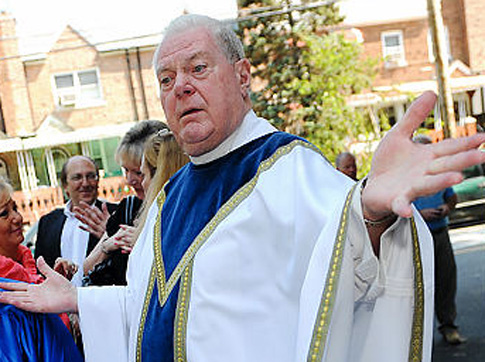 Accusations of sexual abuse often provoke disbelief and comments “How could he have done such a thing? He done so many good things.”

Parishioners still leap to the defense of priests accused of abuse. In New York:

A Marine Park Catholic church dedicated its Christmas display to a priest accused of sex abuse, drawing outrage from one of his his alleged victim’s family.

Msgr. Thomas Brady, 78, a retired pastor at Good Shepherd Church, was placed on administrative leave after he was charged in October with attempting a “criminal sex act” on two teenage boys – but officials at the church still dedicated their annual tree lighting to him and posted a sign in his honor in front of the church.

The sign, still posted Monday, says the tree lighting “is dedicated to Monsignor Thomas F. Brady for his Service to and Love for the People of Good Shepherd.”

The dad of a then 13-year-old boy who accused Brady of molesting him in the church rectory said he was furious to see the display at the church, where his family are longtime parishioners and his son attends the parish school.

“That’s a slap in the face,” he said. “Take it down. That’s hurtful. You’re gaining support for Brady, but what about the victims?”

Many parishioners have backed Brady, who was pastor at the church for more than 20 years before retiring in 2009 and was also a chaplain for the Fire Department, and insisted the accusations couldn’t be true. The priest has suffered several strokes and is battling lung cancer.

Family friend Mary Ann Moran, 54, said although Monsignor Brady performed her mother’s funeral and she appreciated his efforts to unite the neighborhood after Sept. 11, she was angry he would be honored after the accusations came to light. “I understand how we feel so connected to the priest,” she said. “In any other job or organization, someone who’s been arrested for sexually abusing a child would never be honored just for doing their job.”

This priest may or may not be guilty. The courts have to decide. But his good works do not mean he could not have committed a crime.

Abusers do many good things; they are seemingly altruistic and willing to go out of their way to help other people. But this altruism is in the service of narcissism. The narcissist wants others to have a good opinion of him, so he may do good things. But the purpose of these good actions is to feed his self-image of being a good person.

He wants to think of himself as a good person even though he may also do terrible things. He does so much good that he is entitled to whatever he wants, including sex with children. He may do some mental creative accounting: “The good I do far outweighs any bad things I may do,” or he may be grandiose and feel he is not bound by the rules to which ordinary mortals are subject.

Those around him often feed his narcissism and grandiosity; the clergy and parishioners in New York may be doing that to Thomas Brady. And if there are other victims, they see how the parish will respond to accusations.

Leave a Comment
« Happy Boxing Day! » A Cost of War