The Hurt Feelings of a Cardinal

I have refrained from commenting on the sexual abuses cases in the Church, because there is little more to say that I have not already said.

But the Karadima case shows that the top hierarchy in the church still has brains rotted by clericalism.

The retired archbishop of Santiago is denying he covered-up for an abusive priest in Chile, but is acknowledging the priest’s popularity and ability to produce seminarians weighed on his decision-making.

Cardinal Javier Errázuriz   wrote a letter May 10 to his fellow bishops denouncing the “defamation” he has been subject to and defending his handling of the case at the center of Chile’s sex abuse and cover-up scandal.

This is what Errázuriz did and didn’t do:

In Errázuriz’s letter, obtained by The Associated Press, the emeritus archbishop insisted that he was only following church law in waiting so long to launch an investigation into the Rev. Fernando Karadima. Only in 2009, some five years after he received the first complaint, did he start the process.

Five years before he did anything.

Errázuriz  wrote that it had been “difficult” to reach the Vatican-required standard of being convinced that the accusations were “at least likely,” given Karadima’s popularity.

Errázuriz has previously admitted he didn’t believe the victims initially, and has subsequently called one of them a liar and “serpent.”

“They were accusing a priest with a great pastoral calling, whose preaching enriched more than 30 young people who were ordained priests and four priests who were consecrated bishops,” Errázuriz wrote. “They also accused a priest who inspired a youth association that propagated his fame.”

While sex abuse victims have long accused the Vatican and Catholic hierarchy of protecting predator priests — especially those who attract new vocations and donations — it’s rare for a bishop to freely admit that such considerations weighed on whether or not to believe an allegation.

In addition to the delay in starting an investigation, the survivors point to a letter Errázuriz wrote in 2006, well after receiving the first allegations, in which the archbishop reassured Karadima he wasn’t being “punished” by agreeing to leave his parish.

“You want to be a saint, and this is how saints do it,”Errázuriz wrote, giving Karadima talking points on how to spin his departure from his community as simply a retirement. Karadima would later be convicted and sentenced by the Vatican to a lifetime of penance and prayer for his sex crimes.

Another letter, from 2010, shows Errázuriz persuading a Karadima protege to explain that the hush money given to an accuser should be explained as a charitable donation, or “work of mercy,” so as to not arouse suspicion.

It’s clear there was never any crime or cover-up” on his part, he wrote. Errázuriz said he wanted to set the record straight — and had been urged by unnamed supporters to do so — because “I’ve been publicly defamed in recent weeks, branded as a delinquent, criminal” by Karadima’s victims.

Poor Cardinal Errázuriz — his feelings are hurt. His cover-up was not a cover-up because, well, because.

Unless Francis takes severe action against Errázuriz, all bishops will get the message (whatever Francis says) that the Vatican will tolerate cover-ups and lying – such crimes will not affect careers or promotions or cardinals’ hats.

The soon-to-be (maybe) ex-bishops of Chile

Every bishop in Chile offered his resignation to Pope Francis on Friday, after a three-day emergency summit at the Vatican to discuss Chile’s sex abuse scandal.

In total, 31 active bishops and three retired bishops announced in a statement that they had offered to resign over the scandal and place the issue “in the hands of the Holy Father so that he might freely decide for each one of us.”
The simultaneous resignation of all the bishops in a single country is thought to be unprecedented in the modern history of the Catholic church.

Will Francis accept the resignations? or is this just a bit of theater? Stay tuned.
Leave a Comment

The Agony of the Church in Chile

The Vatican has publicly stated that the Rev. Fernando Karadima was a sexual abuser. In Chile he was a combination Maciel and Fulton Sheen. He apparently was an extraordinarily effective preacher and giver of retreats, although now some suspect he was not simply an abuser, but an atheist.

In such a dreadful situation it is hard to find any ray of light. But the spiritual maturity of some Catholics in Chile has been deeply edifying. I previously quoted Juan Carlos Cruz, a victim.

Here is what Joaquín Lavín, the Minister of Education and a supernumerary of Opus Dei said about the accusations:

(they are lamentable, but the faith is in Jesus Christ, not in the person of a priest)

(It is lamentable that at times Catholics are affected in their faith. But the faith is not in the priests, but in Jesus Christ and that is what is important. Christ will never disappoint).

The Jesuit Fernando Montes, rector of the University Albert Hurtado called Karadima a “dictator” and said that this condition “favored an environment for committing the abuses.” Montes explained

There is in the church a danger of sacralization, that the person in authority is not just an authority, but is transformed into a sacred being, who cannot be touched, who cannot be criticized, and in this sense there can be an enormous oppotunity to redefine the way of exercising authority.

Montes said that this

“divinization can produce a dictator. Spiritual direction, instead of a respectful accompanying to say “that you are sad and I will help you,” is converted into “I tell the other person what he has to do.” This appears to be aberrant because it produces a leadership with dependency, in circumstances in which the Gospel requires a leadership of service.”

The Son of Man came not to be served, but to serve, and to give His life as a ransom for many. 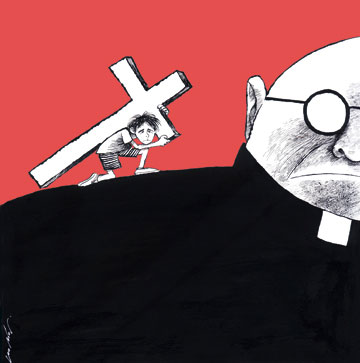