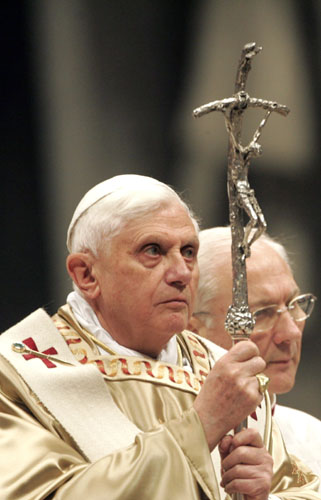 I have been harsh in some remarks, but I really like Benedict. I pray for him every day, and did so when he was a cardinal. In an interview years ago he said he liked to vacation in a cooler spot than Italy, but the salary of a cardinal was not enormous. I sent him a substantial gift and asked him to use it for himself – he wrote back that he couldn’t do that but that he would use it for the CDF library. I got a Christmas card from him that year, which I put out every year until I lost it.

Both John Allen and Jason Berry (Vows of Silence – about the Legion of Christ – I funded the documentary) think that Ratzinger had a real change of heart after he started reading dossiers on abuse – and I suspect that he saw sanitized versions. When he became pope, he acted against the some of the most prominent abusers, abusers who had protectors in John Paul and probably Sodano.

Ratzinger made a dreadful mistake in Munich and should own up to it. He should never have turned such a sensitive case over to a subordinate and not followed up on it. He should also have found some way to discipline the worst offenders, or at least the most prominent offenders, among the bishops who enabled abuse.

He is paying for these failures now – his mistakes will be all his pontificate is remembered for. I wish he would own up to his mistakes and confess to the Church that he has not been a perfect bishop and pope – but he has tried.  And how well could any of us handled such responsibilities? An open and sincere confession would clear the air, and only his incorrigible enemies would continue attacking him. But defensiveness will provoke only more attacks and make people wonder how badly he has failed.