French law makes “cults” illegal. The behavior of some members of the Community of the Beatitudes helps explain why the French have such a law.  Marie-Claudine Chaupitre interviewed a woman who had grown up in the community:

A Victim of Abuse, Forced to be Silent

The sexual abuse experienced at the age of 9 years in the charismatic community where she lived with her parents, then the rejection by her family for 20 years: Solweig Ély tells her terrifying story.

On November 30, at the correctional tribunal of Rodez (Aveyron), the Breton Solweig Ély will not lower her eyes in the presence of the one who, during several months, defiled her childhood.

Pierre-Étienne Albert appeared on the televised newscast of France 2 on an evening of February 2008. In the presence of his face, Solweig was overcome with nausea. This religious man, an esteemed member of the community of the Beatitudes, a Catholic charismatic movement, there made his complete confession. He was going to send the police a list of 57 names of children who were victims of his abuse.

Solweig was part of it. “Although a large number of us tried for a long time to forget, he imposed himself another time, brutally, on our privacy,” she testified in a book that appeared today. “It had on me the effect of a new act of abuse.”

Everything for the Community

Every evening, between October 1989 and Easter 1990, this religious man visited the bedroom of the terrorized child. She was 9 years old and lived with her parents and her sisters at the White Abbey, at Moryan (Manche), one of the houses of the Community the Beatitudes.

Families lived there side by side with religious. Solweig’s father, a tax collector in Côtes-d’Armor, and his wife, had sold their possessions, given them to the Community of the Beatitudes, and dedicated their life to prayer.

“The authority of the head of the family was transferred to an official of the community. Despite my love for them, I reject that my parents put up with it.”

In the strict and isolated  context of the life of the community, the child could not confide. One evening, her father surprised Pierre-Étienne in the bedroom. He shut the door without saying anything. “My parents demanded that I smother my sorrow. In addition to the traumas inflicted by my abuser, their rejection afterwards constituted the most sorrowful trial.”

Suring more than 20 years, the young women was forced to be silent –  treated as a liar, sent to boarding school with host families. “You are the rotten fruit, the door through which the devil threatens to enter into our family,” her father hurled at her one day. Then the young woman started a long wandering, discolored by black ideas.

Pierre-Étienne Albert’ s confession  in the media did not give her peace. In the meanwhile she had started a family which helped her rebuild herself. She awaits two things from the hearing on November 30: “To hear that we are not at fault, but are victims. And that this man will never be allowed to harm again.” 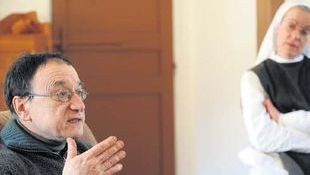