The Index of Forbidden Blogs 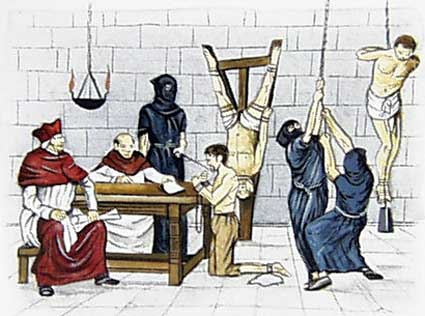 Just when you think that the bureaucrats at the Vatican cannot do anything stupider than they’ve done before, they manage do outdo themselves:

One of the domain names of a website that is the primary source of information on clergy sex abuse cases has been blocked on the Vatican’s web servers.

Users on Vatican servers who try to access one of the four web addresses for Bishopaccountability.org, which tracks publicly available information on clergy accused of abuse, are told the page has been blocked because of “Hate/Racism.”

A Vatican spokesman said the site may be blocked because of an automatic filter system that checks words that appear on websites for explicit nature or inappropriateness.

Bishopaccountability.org, which is a non-profit corporation in the U.S. state of Massachusetts, is run by a staff of two located in the Boston area.

A staple of those researching the decades-long clergy sex abuse crisis, the site includes links to reporting on abuse since the 1980s, a database of accused abusers throughout the U.S., testimonies of abuse survivors, and court documents from lawsuits and criminal prosecutions across the U.S.

Among its activities in the past year, the site has:

*Made available more than 8,500 pages of material detailing claims of sexual abuse by a group of Franciscan priests and brothers in California, after their court-ordered release in May 2012;

*Provided a detailed timeline of the witness testimonies and evidence in the trial of Msgr. William Lynn, a former official in the Philadelphia archdiocese who was found guilty in June 2012 of endangering children during his time at the archdiocese from 1992-2004, and;

*Given background information on the release of some 12,000 files documenting Cardinal Roger Mahony and the Los Angeles’ archdiocese’s handling of abuse cases in the 1980s, following the files’ court ordered release in February 2013;

“This Web site is dedicated to the survivors and their families and loved ones,” the site states on its “About us” page.

Access to one of the site’s four addresses was prevented by the web service provided in Paul VI Audience Hall, a facility the Vatican has provided for use by reporters during the papal transition.

I helped BishopAccountability get started. It has hundreds of thousands of pages of documents which are being organized and put on the web. Sunlight is the best disinfectant.

What the Vatican bureaucrats at all levels do not yet realize is that the web makes secrecy almost impossible. Their idiocies will be broadcast world-wide, so they might as well do the right thing.

Any attempts to suppress the web will fail, and will only give wider publicity to their mistakes:

WHAT THE VATICAN DOESN’T WANT YOU TO KNOW!

(PS: The excuse that it was blocked accidentally does not hold water. If it had been blocked because of sexual content – understandable – it would have said BLOCKED BECAUSE OF SEXUAL CONTENT, not HATE/RACISM. Maybe Cardinal Mahony’s delicate sensibilities were offended.)