The Wimp Factor in Politics

SCIENCE proves that leftists are the 98-pound weaklings of the political world:

Men who are physically strong are more likely to take a right wing political stance, while weaker men are inclined to support the welfare state, according to a new study.

Men’s upper-body strength predicts their political opinions on economic redistribution, according to the research.

The principal investigators – psychological scientists Michael Bang Petersen, of Aarhus University in Denmark, and Daniel Sznycer, of the University of California in the U.S., believe that the link may reflect psychological traits that evolved in response to our early ancestral environments and continue to influence behaviour today.

Professor Petersen said: ‘While many think of politics as a modern phenomenon, it has – in a sense – always been with our species.’

In the days of our early ancestors, decisions about the distribution of resources were not made in courthouses or legislative offices, but through shows of strength.

With this in mind, Professor Petersen and Professor Sznycer hypothesised that upper-body strength – a proxy for the ability to physically defend or acquire resources – would predict men’s opinions about the redistribution of wealth.

The researchers collected data on bicep size, socio-economic status, and support for economic redistribution from hundreds of people in the United States, Argentina and Denmark.

Professor Petersen said: ‘Despite the fact that the United States, Denmark and Argentina have very different welfare systems, we still see that – at the psychological level – individuals reason about welfare redistribution in the same way.

Men with low upper-body strength, on the other hand, were less likely to support their own self-interest.

Professor Petersen said: ‘Our results demonstrate that physically weak males are more reluctant than physically strong males to assert their self-interest – just as if disputes over national policies were a matter of direct physical confrontation among small numbers of individuals, rather than abstract electoral dynamics among millions.’ 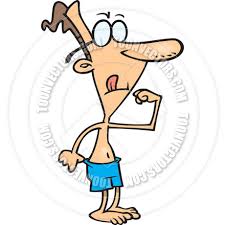 “It must be true; its SCIENCE!”