A Disquisition on the Spanish Inquisition 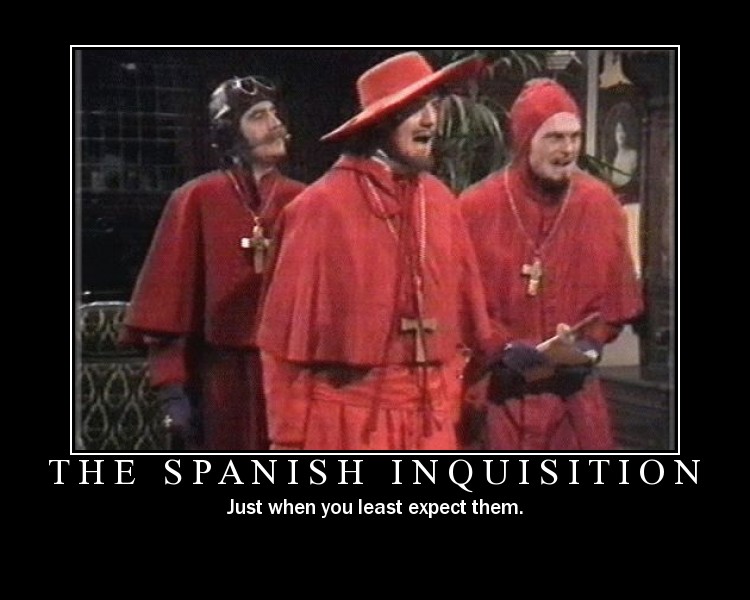 But there were other Inquisitions in Spain. In the northeast corner of Spain lies Catalonia, with its own culture and language and laws. It was ruled by the Spanish king, but was independent of Castile and León. It therefore had its own Inquisition.

The Catalan Inquisition was set up to deal with conversos, Jews who had pretended to convert to Christianity after all Jews were expelled from Spain. However, there were only a handful of conversos in Catalonia, and that problem rapidly disappeared.

Like all bureaucracies, the Catalan Inquisition had no desire to end itself and instead sought to find other problems that would justify its existence. Of course heretics were a proper object for the Inquisition to investigate, but, alas, there were no heretics in Catalonia, much to the Inquisition’s disappointment.

Inquisitors were headquartered in Barcelona and were supposed to travel around to all parishes in Catalonia to investigate problems. However, Barcelona in the 15th-17th centuries was a very pleasant city, the roads in the countryside were bad, the weather was too hot or too cold much of the year, and there were bandits and bad food to deal with. So every few decades or maybe every century or so the Inquisition would show up at a parish and read in Castilian Spanish a long list of obscure heresies and ask people to come forward to denounce anyone who held them. Most people in the countryside did not understand Castilian, and their parish priests had already warned them to keep their mouths shut. The Inquisition, although it is accused of terrorizing the peasantry, in fact had minimal contact with 90% of the population.

The Inquisitors spent most of their time in Barcelona censoring books. As many classical texts had been edited by humanists who later became Protestants, the Inquisition confiscated the editions of Terence and others. The University complained, and the Inquisition contented itself with inking out the offending names of the renegade humanists. (Take that! Melancthon)

(This reminds me of the second grade at St. Matthew’s Elementary School in Baltimore. The first poem in our little poetry book was a sappy poem by Father Leonard Feeney. He got into a fight with Cardinal Cushing over the meaning of the doctrine of extra eccelsiam nulla salus –outside of the Church there is no salvation. Cushing had Feeney excommunicated. Therefore all over America an equally sappy poem was sent out and pasted over the offending poem of Father Feeney. Later I and my friends always referred to Feeney by the Homeric epithet, “he of the pasted-over poem.” But I digress.)

Occasionally the Inquisition would find a monk who had given a badly phrased sermon, or a young man who claimed that fornication was not a sin (“I do not believe anyone will go to hell just for screwing,” one opined), but usually its search for heresy was fruitless. It had to content itself with other crimes under its jurisdiction, like sodomy and bestiality – not very dignified crimes for learned Inquisitors to concern themselves with. It is hard to have a really good auto de fe with only a shepherd who has been too affectionate with the sheep. The only possible heretics the Inquisition encountered were Frenchmen who aroused popular hostility because France was infected with Calvinism – but most French immigrant laborers had no intellectual interests.

Popular Catholicism in Spain was somewhat different from clerical and especially Tridentine Catholicism. It was much more active and rowdy. Pilgrimages, carnival, dancing and fireworks (inside the church!) and so on. Reforming clerics sound like spoilsports and wet blankets in their attempts to end the fun.

But popular religion had a much darker side: belief in witchcraft. The Catalan Inquisition decided that witchcraft did not exist and that belief in it was a vile superstition. Unfortunately, the people and the secular authorities did believe in witchcraft and often executed old women whom professional witch hunters accused of witchcraft. The Inquisition did everything it could to protect the accused and sometimes to literally snatch them from the hands of secular authorities before the supposed witches could be executed.

The Inquisition’s campaign against belief in witchcraft had a long history. Charlemagne had forbidden the burning of witches and made the killing of a supposed witch a capital offence. I believe that the persecution of witches was far more prevalent in Protestant countries than in Catholic ones. Why this was so I do not know. Both forms of Christianity shared a belief in the existence of demons, but the clergy of the Catholic Church seemed to be much more set against the belief in witchcraft.

The Inquisition’s campaign against heresy and against the belief in witchcraft may be manifestations of the same rationalism. The Inquisition did not believe that witchcraft existed and despised the popular belief in it because it led to the murder of innocent women. It also looked for heresy, wrong ideas about God and the Church, because it had seen the damage that false beliefs could do. I don’t think that Calvinism or Lutheranism was likely to result in crimes (although one should remember the Anabaptists at Munster) but the Inquisition was not taking any chances.

Also, and more importantly, if the Inquisitors stopped looking for heretics, what would they do? It was hard to find a cushy and respectable clerical job in Spain. Many of the Catalans whom the Inquisition prosecuted were accused of the offense of saying that the Inquisition was wasting time and money by looking for heresies when there were none in Catalonia. No bureaucrat likes to be told his job should be abolished.

(PS, I derive much of this from The Phoenix and the Flame: Catalonia and the Counter Reformation by Henry Kramer. I am reading up on Catalonia in preparation for a hike there next year).