Bad Idea of the Month Club: What Were They Thinking?

The Jews Who Dreamed of Utopia

An exhibition in Vienna explores the role that Jewish philosophers, politicians and artists played in building communism and international socialism.

The Jewish Museum  has this exhibition.It is true that Jews were disproportionately represented among Communists. The words The Protocols of the Elders of Zion, pogrom, Cossack, Czarist secret police tend to explain this.

As Farrago admits, “This is hot stuff:” “that many communists were Jews has, with horrible frequency, been twisted to imply that all Jews were communists. The Nazis cast Jewish Bolshevism as a single scourge.”

But the Jewish museum blithely displays materials that could fuel this insanity.

Modris Ekstein, in his memoir Walking toward Dawn, mentions the presence of Jewish commissars  in the Soviet takeover and torture of the Baltic states in 1939-1941, and thinks that this explains, although it does not justify, the collaboration of the Baltic ethnic groups with the Nazis in the persecution of Jews.

Therefore the Jewish presence in Communism needs to be explored with the greatest caution. Farago sees the danger in the alt-right revival of anti-Semitic tropes; but of course the physical attacks on Jews have all been committed by Muslims, not right wingers. Muslims have little use for Communism, and anything that tends to cement the identification of Jews and Communism is, as Farago admits, hot stuff.

Father Scharbach mentioned in his sermon this past week that we have been told on the highest authority that the world will know that we are the followers of Jesus by our love for one another. He also mentioned that he found that a sense of community was weaker in Catholic churches than in Protestant ones, and it was not simply a function of size. I have thought that Catholics have a better theology of the church, but Protestants often have a better practice.

Nor is this simply a matter of warm, fuzzy feelings, but has serious practical effects. Criminologists have noticed that the religious attitudes of an isolated individual do not have a lot of effect on his (almost always his) likelihood of committing crimes. But once a person is a member of a believing community, his beliefs have a major effect on the likelihood that he will commit crimes.

And it looks like the closer the community, the less the likelihood. The sociologist Lee Ellis found that “among the main Western religions, membership in the Jewish religion is associated with lower crime rates, compared to Christian religious membership as a whole; and, among Christians, Protestants as a whole have lower crime rates than Catholics.” Jews, combining religion and ethnicity, have a very close community, and therefore have the least crime. I believe that in the whole history of the United States that no Orthodox Jew has ever been convicted of murder.

This is a negative measure, but it indicates that a religious community is important in forming character – not exactly the latest news, but it is nice that scientists have noticed it.

First and second generation Jewish immigrants could not understand the American fascination with sports. When their children got involved, incomprehension sometimes followed.

One of my favorite immigration generation stories is about football, believe it or not, rather than baseball [here one may detect an allusion to Getsl].  Sid Luckman, of Colombia University and Chicago Bears’ fame, in the 1930s and 1940s, had a father who was – what else—a tailor in New York. He rarely got to see his quarterback son play football, but one Sunday the Bears were in New York playing the Giants at the Polo Grounds. Luckman arranged for his parents to have seats on the 50-yard line. For most of the first quarter, things went smoothly. But then on one play, the Bears’ pass protection broke down.

Giant defenders rushed in, and Luckman had to scramble, to dodge the tacklers before they could get to him. As he was running back and forth, trying to avoid these great, big linemen, his father’s voice suddenly called out from the sidelines, “Sidney, let them have the ball. I’ll buy you another one.” 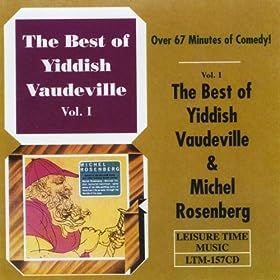 When Central- and East-European Jews came to the United States, they encountered quaint native customs. Michel Rosenberg describes how Getsl (the typical Lower East Sider) by chance attends a baseball game. Having learned that a new cantor is performing somewhere in the Bronx, Getsl gets on an uptown train and follows the crowds which he assumes are going to hear the new cantor. They are getting off at “Yankl Stadium.” Getsl takes his seat and observes

From one hole emerges some kind of man with a blue suit and a strange yarmulke. This is certainly the choir leader. Following him comes a colleague with woolen socks, long underwear and a sweater and on the sweater is written “Yankl.” That’s my cantor! They begin praying. Suddenly I feel such a slap on my back that my right lung feels like it’s going to collapse. “Hello, buddy!” I take a look it’s the same guy with___. He gives me such a greeting with “Ata boy!” that I almost pass out. I say, “Who is the man with the long suit and the yarmulke?” He says, “That is the oompire.” I say, “And the one with the freezing hand who wears a glove/” He says, “That is the peetcher.” And immediately emerges someone with a mattress on his belly and something on his face that looks like a strainer for noodles. He says, “That is the catcher.” I say, “What does he catch other than a cold if the pitcher spits in the glove and throws the ball and there’s tossing from pitcher to catcher and catcher to pitcher. Neither one wants the ball and they stand there!”

(Thanks to Jack Kugelmass, Jews, Sports, and the Rites of Citizenship)

Getsl’s routines are on the internet – in Yiddish. My wife, who lived on the Upper West Side among one of the largest populations of Yiddish speakers in the world, says they are all of this caliber.

Some Jews regret the Jewish penchant for comedy. Jews use comedy to defuse a situation that a Goy would confront violently. I am not sure the Gentile way is better.

I am revising my first book, The Church Impotent, and I am including a new section on the struggle  with masculinity that Jews have had in the modern world. For two millennia the Torah scholar was the ideal Jewish man; his exercise was not physical but mental. After the Fall of Jerusalem rabbis regarded sports, especially violent sports, as goyim naches, the games Gentiles play, things which if not forbidden by the law were still felt to be foreign and perhaps despicable. Sports were at best bitul Torah, a waste of time that should be spent studying Torah.

When Jews came to the United States, they were immersed in the American sports culture.  Jewish boys born in the United States wanted to fit in, but their parents were unsympathetic, and those who wanted to be athletes discovered that Jewish law made it difficult to compete in sports: Saturday games and a non-kosher training tables were the biggest problems. The Law indeed was designed to keep the Jews from becoming like all other nations, but Jewish males felt they could not be recognized as real men, either by themselves or by the Gentile world, if they did not become part of the sports culture.

The problem has led to endless disputes among Jews about the proper role of exercise and sports in Jewish life. The desire of men to be masculine is a strong competitor to the desire to remain a Jew, and many chose masculinity rather than Judaism. Among those who wished to remain loyal to Judaism while pursuing athleticism had to battle many obstacles.  Jeffrey Gurock, a professor at Yeshiva and an athlete, has written a informative, funny, and moving book on the struggle: Judaism’s Encounter with American Sports. He begins with the Maccabees’ rejection of the Greek gymnasium and ends with the New York marathon.

Growing up, Abe Gerchik, who in his parents’ opinion spent too much time playing ball in the streets of Brooklyn, “thought his  first name was ‘get a job’ and his last name ‘bum’ because his mother always used to say to this budding athlete ‘get a job, bum.’”

Does my passion for sports ever face off against Judaism’s religious teachings? Rather than conflicting with faith, athletic participation enhances me spiritually. The prophet Isaiah’s runners’ creed always moves me:

Even the youths shall faint and be weary, and the young men shall utterly fall. But they who wait for the Lord shall renew their strength. They shall mount up with wings as eagles. They shall run and not be weary. They shall walk and not faint.

It is fitting that this particular prophetic portion is read in synagogues the week before or after the New York City Marathon. Here, Judaism and sports’ calendars surely intersect. I also encounter the Almighty up close and personal at the starting line of an arduous race when I confidently “entrust my spirit…as long as my soul is in my body. The Lord is with me, I am not afraid.”

I believe that even if sports has not made me a more observant Jew, my deep devotion to athleticism has certainly bonded me closer to my Creator.

The struggle that Jews have engaged in to keep loyal to the Law, even what Christians regard as the ceremonial precepts, is extraordinary and humbling for a Christian to observe. Too many Christians compromise the ethical demands of the Law, while Jews will often do their best to keep even the ceremonial Law.

Uniting body and soul in demanding physical activities is also rare, and one of the reasons men distance themselves from religion. Not everyone can be an athlete, but Christianity can become too cerebral, a matter of words rather than actions. Physical intensity and challenge is something men desire, and like us goyim, Jewish males feel the same pull.