Kok-Boru or the Young Male Mind of Kyrgystan 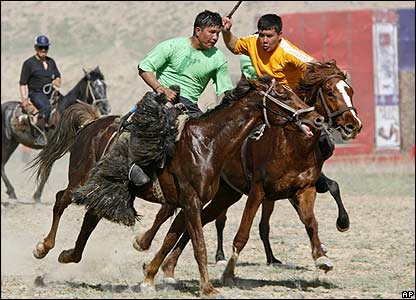 I think this is for real, unless Sascha Baron Cohen has a new persona.  TAZ interviewed two Kok-Boru players in . The sport was, for reasons that will become clear, outlawed when the country was part of the . My translation:

Ruslan Taigashkaeb: Two teams with four players mounted on houses ride against each other. The goal is to bring a dead sheep over the goal line of the opposing team.

Why do you have to use a dead sheep?

Taigashkaeb: Every foreigner asks me that. But the animal is killed before the game.

However you could use a ball.

Taigashkaeb: It’s a tradition, that the winning team gets the animal to eat it. What would the players do with a ball?

Do the horses suffer under the violence of the game?

Taigashkaeb: During the contest the horses don’t think of what they are doing. But after their team has won, they feel they are part of the team.

When Europeans observe the game, they have pity on the animals and don’t see the appeal. >Taigashkaeb: The game has an unbelievable tradition. When did football start? Kok-Boru goes back a thousand years. All our ancestors, who for centuries lived as nomads in the mountains, played it. When belonged to the Soviet Union, banned Kok-Boru. However we played the game secretly in the villages.

Has the national sport changed?

Taigashkaeb: Yes. Previously a game could last a week long and whole villages joined in. The games were hard, and many times people lost their lives. For ten years we have had good rules. A game lasts three times twenty minutes with ten minute pauses. And its become safer.

What does “safer” mean?

Taigashkaeb: Previously there were many cases of death, because everything was allowed to get to the sheep. Even spectators lost their lies. Today the rules are stricter, and you may not deliberately injure an opponent.

Urmat Musaev: We wear a uniform, the arms and legs protected from blows and kicks, and a mask for the face. I have no fear.

You have a scar on your neck and weals  on your arms.

Musaev: Yes, there are things that happen in the enthusiasm of the contest. The horses often injure us without noticing it. And I first notice it when the game is over.

Taigashkaeb: It happens that a player breaks an arm or leg. Bur we have medics at the edge of the playing field.

And, as you may have suspected, there is a Borat connection:

Does have the best Kok-Boru players? Musaev:  Last year I played with a national team at a tourney in Astana. won.

Taigashkaeb: Next year we’ll get the cup back. About it’s a question of prestige.