The Dudes of the Beatitudes

Croissant
Madre
Albert
The background story for the history of abuse in the Community of the Beatitudes might give us some sympathy for the church and police investigators who are trying to entangle what really happened. Religion en Libertad summarized it.

Gerard Croissant (Aka Ephraim) was the founder of the Community. He was born in 1949 of a Protestant family. He was immersed in the generation of 1968, the soizante-huitards, as the French call them, and sought a utopian community life. He entered one ecumenical community inspired by Gandhi, where he met Jo, his wife. He then discovered the Charismatic Renewal.

In 1974 he, his wife, and another couple decided to live in a community. In 1975 Gerard converted to Catholicism and in 1978 became a permanent deacon and took the name Brother Efraim. The bishop of Albi took the new community under his protection.

The new Community of the Beatitudes had clerical, religious, and lay members both married and single, all living together. It currently has 100 priests, 40 seminarians, 350 consecrated women, and hundreds of lay members. It has houses in 30 countries.

At some point Gerard went astray. He had the useful ability to multiply bread, chocolate yogurt, and banknotes.  Using “supposedly mystical language” he seduced women in the community.My guess is that be combined Quietism (the perfect can do no wrong) with bridal mysticism. One woman, Gisele.  described his modus operandi: she

spoke of “mystical nights” put into practice by Ephraim. he had “developed a ceremony” to “possess the body of certain religious women.” He maintained that “consecrated women are called to place their libido in the kingdom of God.” Questioned about this, a former women community member completed the information about these mystical unions which, according to Ephraim, were at the same time unions of prayer and sexual unions, practiced “in the Church by St. Clair with St. Francis of Assisi and by Pope John Paul Ii with Sister Faustina Kowalska!!”

The process may have been assisted by the psychotropic drugs which he liked to distribute to the community.

He committed adultery, but no crime. He was removed from all government in the community in 1996 and in 2008 he was reduced to the lay state and the Community expelled him. He moved to Rwanda and was taken in by the White Fathers. Rwanda did not want him, so he has returned to France and is associated with a group called Kinor. He practices psychotherapy. He has resumed preaching and giving talks without any authorization from the Church.

Philippe Madre is Gerard’s brother-in-law. He was one of the first members of the Community and was Gerard’s obvious successor.  He is a psychiatrist and was a permanent deacon, and is well-known for his healing prayers and his retreats. In 2005 he was accused of “sexual abuse by  a person having authority.” In 2010 the ecclesiastical tribunal of Toulouse declared him guilty of “abusive behavior in the exercise of his spiritual functions.” That is, he used cultic methods of manipulation. Madre was reduced to the lay state in 2011 and expelled from the Community. He has returned to general practice.

Pierre-Etienne Albert was the musician of the Community; he sent to music the biblical songs composed by Gerard. In 2003 a court found that he had abused minors between 1980 and 1990,but the statute of limitations (prescription in the Roman law) prevented a conviction and punishment. In 2008 he went on television and confessed that he had 57 victims, and this upcoming November 30 his trial will begin. Seems cut and dried.

BUT – here commences a nightmare for the police and the judiciary –

The Community was convinced he had abused minors and that he suffered from a “psychological debility.” It kept him away for minors and closely supervised him. He was living in the abbey of Bonnecombe with other adults. In 2008 the Community wanted to live Bonnecombe but a disagreement ensued. Muriel Gauthier, although not a member of the Community, agitated against the move, “She seemed to be un iluminada, an enlightened one, in the bad and charismatic sense of the word, convinced that God was leading her against legitimate authority” sources in the Community said. And they suspect that she, in her war against the community, persuaded Albert to self-incriminate himself of things that he did not certainly do. The court has to sort it out – but if Albert confesses to abuse which he did not do and possibly could not have done, his confession to acts of abuse that he in fact did is undermined.

Ecclesiastical authorities have to deal not only with psychopathic manipulative abusers but also people who claim special powers and messages from God, powers and messages received outside the regular channels of authority. There are few people more skeptical than clerics about claims of private revelations and supernatural powers – although as believers clerics have to admit that these can exist and that God is free to act outside the ordinary structures of the Church (e.g., Francis of Assisi).

Efraim’s enemies initially seem to have been in the traditionalist wing of the Church and they detected (correctly) that he was full of himself. 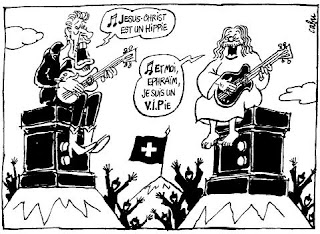 But their medieval equivalents would probably have said the same thing about Francis.

One commentator on the Religion en Libertad article represents this view (for which there is much to be said):

There in an excessive cult of personality, instead of giving glory to God, each “iluminado” founds a movement in which government and spiritual direction are mixed. Almost all of the new movements are putting themselves in question by the conduct of leaders who seem more to seek and to prepare for their self-canonization rather than the good of the Church…. They fall into pride, believing themselves directly enlightened by the Holy Spirit. But there is only one Church founded by Christ and it is a hierarchy in which the charisms are at the service fo the Church and its mission and not for the construction of particular sects.

Can’t we recognize that the Holy Spirit is showing himself clearly in allowing the revelation of the distorted structures of the new movements, in order to return us to the bosom of the Church and to avoid sectarianism?  Aren’t there proven established religious orders? Why should there be more charisms?

But sometimes a Francis, an Ignatius, a Wesley are necessary for the health of the Church.