I arrived back from the West Coast to a much-changed Baltimore. All the progress that the city has made over the past twenty years is now threatened.

I think that what we are seeing in Baltimore is displaced anger caused by shame.

Last night, while West Baltimore was flooded with thousands of police, there were six shootings unrelated to the riot; they were all black victims, and the odds are about infinity to one that the shooters were black.

Each year several hundred black men in Baltimore are killed by other black men – and not word or a protest about it.

Now, even one unjustified killing or death by negligence by the police is too much. The police as agents of the state must be held to the highest standards, and it is in everyone’s interest that the police treat all citizens with respect.

Communities, like individuals, can suffer from shame (think of the sexual abuse in the Catholic Church). Shame about an evil for which one is responsible causes disproportionate reactions to lesser evils for which someone else is responsible. I think we have all seen this in people we know, and perhaps in ourselves.

But of course, such anger does nothing to correct the evil for which one as an individual or a community is responsible.

What do the rioters want? For the police to stay out of their neighborhoods, so criminals can rob and kill without let or hindrance? In that case we would have thousands rather than hundreds of black deaths in Baltimore each year. If the police were absolutely courteous and handled every arrest with a camera crew present, it would do nothing to stop the black-on-black violence.

BTW, the majority of policemen in Baltimore are black, as are the mayor and police chief, and the new state’s attorney. 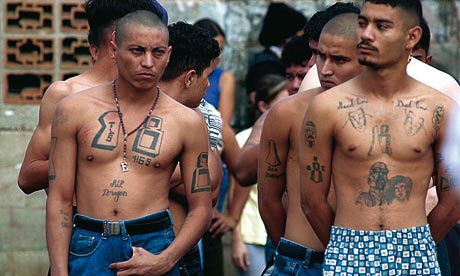 Latino men have the reputation for being detached from the church, and too many of them are caught up in destructive macho and gangster cultures.

Both Catholics and evangélicos (conservative Protestants, fundamentalist/Pentecostal) try to reach them; I have wondered who has the better success.

John Wolseth lived in Honduras and studied a barrio with gangs, Catholic Base Communities, and evangélico (Pentecostal in this barrio) churches. He describes and analyzes that environment in  Jesus and the Gang: Youth Violence and Christianity in Urban Honduras.

Progressive Catholicism emphasizes community and solidarity with the poor and blames the problems of the poor on structural inequities, especially economic oppression.  Catholic youth groups in the barrio follow this analysis and try to identify with the poor. But they are fearful of identifying with the poor who are gang members. Catholic youth blame gangsterism on social inequities, but do not explain why they themselves have not followed the path of the gangsters.

Pentecostals set up a harsh dichotomy between the world ruled by Satan and the church ruled by Christ.  Young men who want to give up the destructive and self-destructive life of the gangs can have a conversion experience and dedicate themselves to a new life, totally rejecting the old one and separating themselves from it. They have to change their lives to convince both the church and their old gangs that they are cristianos. If a man leaves a gang, he is killed by the gang, unless he becomes a cristiano. Gangs usually let Pentecostal former gang members alone, if the former members demonstrate that their lives have really changed. Perhaps it is from superstitious motives, but at least the gangs let them go.

Catholics, with their rhetoric of solidarity, do not offer gang members the opportunity for a clean break that Pentecostals offer. Catholics blame society for individual problems; Pentecostals stress individual responsibility. Wolseth  blames Neoliberalism and American interference for most of Honduras’ problems (and therefore agrees with progressive Catholics), but admits that Pentecostals help some individuals escape from the most destructive consequences of broader social problems.

Perhaps in Latin cultures, Catholics cannot do this. Catholicism and the culture are so entwined that becoming a fervent Catholic does not offer the same sort of break that gangsters need. Pentecostals, as they reject both destructive machismo and most specifically Catholic practices – mass, statues, procession, rote prayers – are foreign to the general Catholic-based culture and therefore can offer gangsters the clean break. (This is my analysis)

The same dynamic seems to be at work with the older married men that Elizabeth Brusco describes in The Reformation of Machismo: Evangelical Conversion and Gender in Columbia. The general culture includes both machismo and Catholicism. When men become evangélico, they reject both Catholicism and machismo. They follow a biblical pattern which makes men responsible heads of household. Catholics of course would like men to abandon machismo and become responsible husbands and  fathers, but they do not seem to be able to offer the clean break that men need.

If anyone has any observations on this, especially from what they have experienced or seen, I would appreciate them.

Violence among Christians or among supposedly civilized states makes some wonder what the Prince of Peace is up to. How can the mass slaughters of the twentieth century, or of more Christian eras such as the Thirty Years War be reconciled with the peace that Christ brings?

Information overload is part of the problem. Since 1945, wars have declined in intensity and number. The world is at peace now more than it has been in a long, long time. But the newspapers, television, and now the internet make the terrors of war omnipresent.

The total number of American dead in is less than that of a single day in World War II, or of an hour in the great trench battles of World War I.As populations have grown, the numbers of dead in war have also grown, but the proportions have fallen.

I am an amateur student of archeology of the American southwest, and for decades archeologists have painted a picture of peaceful societies who learned violence from Christian Europeans.

This is simply false. I have just read Deadly Landscapes: Case Studies in Prehistoric Southwestern Warfare. Violence was endemic among the peoples of the southwest before Europeans arrived. Massacres were common; probably whole nations and languages were wiped out.The book contains a final essay, “Giving War a Chance,” by Lawrence Keeley, author of War before Civilization: The Myth of the Peaceful Savage. There is strong evidence that about 25% of males in pre-civilized societies meet their deaths by violence.

Christianity has not removed, but has tempered the violence of man. The Prince of Peace is at work, but he has difficult material to work with: us.