The Cows of Galicia

About a year ago on a sunny day I climbed into Galicia on the Camino and stayed on O’Cebreiro. I woke to a fog which turned into a driving rain.

The Camino follows farm roads which are also used by the local animals, with predictable results. I arrived in Triacastela in the rain and changed into dry clothes. I usually wore my sandals in the evening, but it was pouring. I therefore wore my boots to church.

The local church is one to Santiago. This photo shows it in a rare moment of sunshine. The building is black with lichen, moss, and small plants nourished by the perpetual rain.

I went into the cold, damp church; the priest arrived wearing a heavy down jacket and invited us to sit up in the choir stalls. As the pilgrims filled the sanctuary, a distinct odor of cow also permeated the church – but then He was born in a stable, so it was the first thing He smelled.

We sat around the altar in a cold twelfth-century Romanesque church with flickering candles and a barnyard odor. The priest came out and noticed that the Brazilian girl next to me was shivering. He went back and got his jacket for her. His warmth made us forget the chill of the church.

Jack Hitt wrote a book in the Camino, Off the Road, from which some of the funniest lines in The Way are taken. Jack did the Camino back in 1994, so the animal population has declined somewhat and facilities are much better, but the Camino is still very rustic.

I had deep sympathy with this passage from his book:

The only accessible roads are ox paths, all paved in squishy sheets of bovine and ovine dung. The village smells of fresh shit, quite piquant in the late morning. Parked at the front door of each house is an ox, who welcomes us by evacuating his bowels in a small explosion. At the occasional post is tethered a cow who also seems genuinely excited by our arrival and speaks oxen. Scrawny dogs howl at our approach, scampering along and then slip-sliding in an impressive 180-degree halt. Chickens flit along the surface of the shit, screeching an unconvincing claim to ownership.

Let me say this about shit. I have spent months walking through all manner of it. To tell the truth, a pilgrim comes to like shit. I know this sounds like an acquired taste, possibly born of necessity. But shit, of the rural variety, can have an attractive odor. I am not including humans; don’t even want to talk about it. But ruminants, horses, rural dogs, and chickens produce tons of dung along the road. And I welcome it because the wafting odor of manure is an olfactory signal of pending rest. It means animals, which means people, which means shelter, which means coffee and water and food. 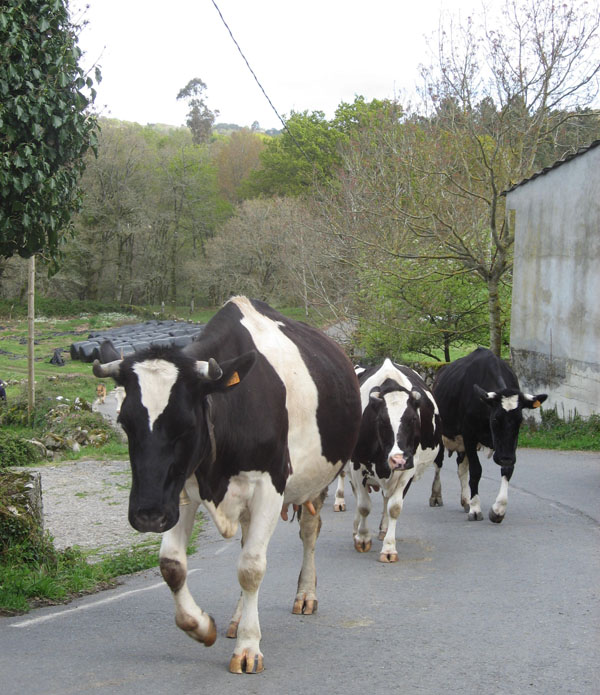 Leave a Comment
« Christianity Today on The Way » Kansas City