Westerners tend to be individualistic. In one of Tony Hillerman’s novels, the Navajo Jim Chee is talking to a new Anglo girlfriend. She asks him to tell her about himself. He describes his clan and family relationships. She replies, no tell me about yourself. He replies, I just have.

Individuals in the western world are indeed more likely to view themselves as free, autonomous and unique individuals, possessing a set of fixed characteristics. But in many other parts of the world, people describe themselves primarily as a part of different social relationships and strongly connected with others. This is more prevalent in Asia, Africa and Latin America. These differences are pervasive, and have been linked to differences in social relationships, motivation and upbringing.

This difference in self-construal has even been demonstrated at the brain level. In a brain-scanning study (fMRI), Chinese and American participants were shown different adjectives and were asked how well these traits represented themselves. They were also asked to think about how well they represented their mother (the mothers were not in the study), while being scanned.

In American participants, there was a clear difference in brain responses between thinking about the self and the mother in the “medial prefrontal cortex”, which is a region of the brain typically associated with self presentations. However, in Chinese participants there was little or no difference between self and mother, suggesting that the self-presentation shared a large overlap with the presentation of the close relative.

Russians, from what I have read, tend to think of themselves more as a member of a group than an autonomous individual, which in part explain their different approach to politics and perhaps their support of Putin.

We went to Santo Domingo pueblo for the feast day, August 4. We were instructed not to take photographs, so I have assembled from the internet some old pictures which may help convey what happened.

We went to the 7 AM mass at the pueblo mission church. The Sacristan looked very Mexican; he read the first two scriptures for the mass, and it was clear that English was not his first language. 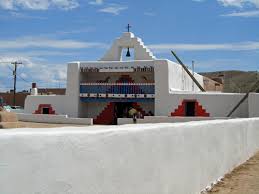 A youngish priest then preached. He explained that the Franciscans had few vocations, and therefore had decided to pull out of the pueblos after 400 years. He was from the Archdiocese, and this was his first mass at the pueblo. He then gave a decent sermon on Saint Dominic. I suspect that the previous priest had not told him what was going to happen during mass.

In the middle of the sermon we heard through the open doors BOOM BOOM BOOM on a drum and TOOT TOOT TOOT on an old bugle. Two men entered, dressed as matachines and riding pantomime horses with bells, followed by men dressed as parody Spaniards, Mexicans, and Anglos (I think). They processed down the aisle and did a little circle in front of the altar as the priest (a little non-plussed) continued preaching. People reached out and patted the horses’ heads.

They then went out of the church, jingle, jungle, jingle, and the priest finished the sermon.

After the mass four men held a canopy over the statue of St. Dominic, carried by other men, and all, priest, people, and we hangers-on, processed through the pueblo for about 45 minutes, singing the Hail Mary in Spanish, over and over again:

The streets and rooftops were lined by the pueblo people, many in their dancing clothes. As we passed they crossed themselves or cast sacred corn meal – and set off firecrackers and blanks.

In the main plaza, about a football field wide and three football fields long, we stopped at the arbor sent up for St. Dominic. He was placed in it, and we went in and venerated him, making an offering of food or money.

I turned around because I heard a sound from the far end of the plaza. A line of 40 koshares (the sacred clowns) were at the end of the plaza, singing in their deep voices.

They sang and walked slowly up the entire plaza, and then broke up behind the arbor. Young women brought them breakfast. They remained in character, eating with their mouths open and loudly burping.

Then the dancers and singers of the first moiety started filing into the plaza. There were perhaps 100 men singing and a 1000 men and women dancing, filling the plaza. One man swung a large pole banner with the corn symbol.

The dancers held spruce branches, and imitated the corn sprouting, growing, and swaying. From the top of the plaza it looked like a field of ripe corn, swaying in the wind.

The men wore kilts; the women wore dresses and turquoise tablitas (headdresses). The dance was a prayer for rain, and the women wore their hair down to imitate the rain. Some women’s hair reached almost to the ground. The clowns shepherded and instructed the little children in the dance. After the first group had danced for an hour, they all filed out, and the second moiety, another thousand dwellers of the pueblo, entered, sang, and danced. Pueblo dwellers hold open house and an all-day feast. We were invited into one house and sat at a table with about 30 different types of food on it. We thanked out hostess, and returned to watch the dance.

We started hearing thunder, and around 3 PM we decided to leave. As we were leaving the pueblo we looked back. Sirens were going off for flash flood warnings. Over the mountains, directly behind the plaza, was a thousand-foot waterfall of rain, flashing with lightning. Elsewhere all was clear. Never underestimate the power of prayer.

A few weeks previously I had been in Iceland, singing Mass in Icelandic and Latin, and hearing Swiss singers in domes above a fjord chanting Laudate Dominum omnes gentes – Praise the Lord, all ye Nations.

Catholicism has its problems, but it also gives one the sense of being a part of an immense and immensely varied community, across the vastnesses of time, space, languages, and culture, across life and death.

(PS: I want firecrackers as part of the liturgy in America.)