Murder on the Wane

First, the most horrifying crimes: the murder of children. These have declined, as this chart indicates.

Each death is a tragedy, but society is, overall, becoming less, not more, violent.

After rising in the 1960s and peaking around 1990, homicides in the United States have returned to the level of 1950. Moreover, these declines continue long-term declines in American homicide rates. One reason  (but only a partial reason, is the increasing incarceration of criminals. Other reasons are better policing and the decline of crack cocaine; but no one is really sure why there has been such a sudden and massive decline. 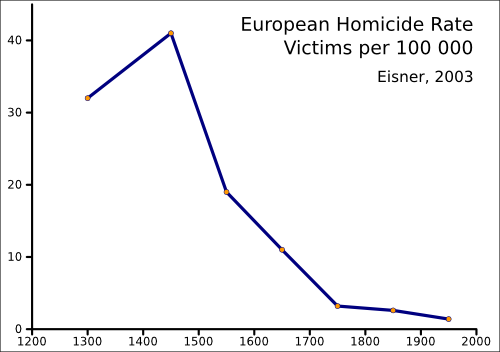 There are also long-term declines in European homicide rates.

Stephen Pinker in The Better Angels of Our Nature documents these declines and also, more speculatively, he sees millennia-long decline in military violence. That is less certain, but it is clear that in many pre-modern societies, a major portion of males meet a violent death.

The decline in homicides in Europe since the Middle Ages is part of the civilizing process, in which the violence and unruliness of young males is disciplined and restrained.

As to Lanza in Connecticut and other mass murderers: They certainly lack empathy, and the absence of affectionate fathers during childhood seems to be a major factor in the failure of males to develop empathy, so single-parent families do no bode well for the future. Males also feel they have to establish their identity, to prove they are somebody, and a few of them choose mass murder as a way of proving this – in vain, because almost no one remembers the names of the mass murderers.

One law about guns that might help is to require all gun owners to keep their guns, especially rifles, in a locked gun safe. If they do not, and someone uses the gun to commit a crime, the gun owner should also be criminally liable. This would help stop adolescents in a sudden passion from grabbing a gun and killing people. But restraining intelligent psychopaths like Breivik in Norway is very, very difficult, without creating a surveillance state that would bring its own problems.

Leave a Comment
« Are men or women more irrational? » Nochebuena