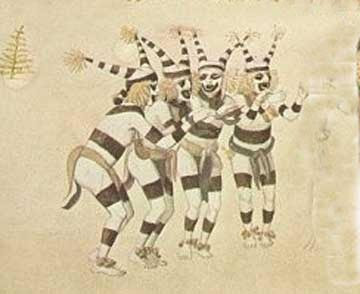 We were in Taos Pueblo for the feast of St. Jerome. In the morning we saw the races and in afternoon we saw the sacred clowns and the pole climb. (No photos- forbidden by pueblo).

We went to mass at the pueblo – all pueblo women; the men were in the kivas. The priest gave a good sermon on the gospel “If your hand leads you into sin, cut it off,” by comparing it with the all too familiar surgery the Indians face. Their diabetes leads to gangrene and the amputation of a limb to save their lives.

We processed with the Sacraments and all the moveable statues of the church to a bower overlooking the race course. The pueblo was at its most striking. The women of the pueblo were dressed in colorful shawls and stood on the roofs of the pueblo, ululating. The liturgical ululation is much neglected these days.

The pueblos seemed to have been formed as a reaction to the hierarchical and perhaps brutal Chaco system – in any case they are egalitarian and conformist. The clowns enforce social discipline by pointing out and mocking deviations from accepted behavior.

One Anglo woman was asking for it: she came dressed as a semi-Indian with braided hair and feathers in her hair. The clowns immediately spotted her and went up to her, and made her go woo-woo-woo with her hand and then do an Indian dance. Indians do not like Indian wannabes.

The clowns also got a 19-year-old pueblo male and made him lie fully clothed in the river – I don’t know what he had done – the possibilities for misbehavior of a 19-year-old male are endless.

The young clown who was supposed to make it to the top of the pole cold not quite do it – the other clowns were a little on the heavy side and didn’t have a chance. They had to continue clowning while they located some who could do the climb and get his ready. They used a kiva ladder to shorten the climb up the 60-foot pole. The climber finally made it.

I wonder what St.  Jerome thinks of the festivities in his honor.

Leave a Comment
« A Touch of Simony » Santiago Mataburócratas