Iconography in Taos has undergone some curious changes.

Santiago Matamoros is all over the Camino in Spain. He is said to have appeared in a key battle and laid low the Moors. He also appears in the church of St. Jerome in Taos pueblo. Here is an old photo of the interior. We weren’t allowed to take pictures, but currently Santaigo has been moved to the top left corner of the wall and the men he is riding down (my wife, whose eyes are better than mine, assures me) are wearing dark suits – that is, they are FEDERAL BUREAUCRATS.

I also noticed that the Santo Niño de Atocha has picked up some of the attributes of Santiago, or at least of a pilgrim. I guess the common element is that they both walk a lot. Wikipedia explains:

In the 13th century, Spain was under Muslim rule. The town of Atocha, a now-lost district nearby Arganzuela, Madrid was lost to the Muslims, and many Christians there were taken prisoners as spoils of war. The Christians were placed on strict punishments and prohibitions, and the devout prisoners were denied food by their captors. According to legend, only children under the age of 12 were permitted to bring them food. The women of Atocha knew that most of the people in the prison, mostly their relatives and friends could not truly survive under such harsh conditions. As a result, the women prayed before the statue of Our Lady of Atocha at a nearby parish, a title under the Blessed Virgin Mary to ask her son Jesus Christ for aid and help.

Reports soon began among the people of Atocha that a child under the age of twelve had begun to bring food to childless prisoners. The child was dressed in pilgrim’s clothing yet could not be identified as to the name of the child or its origins.

When the women of Atocha heard of the child, they returned to Our Lady of Atocha and thanked the Virgin for her intercession. Looking upon the image of the Virgin, they noticed that the shoes worn by the Infant Jesus statue held by Our Lady of Atocha were tattered and dusty. Customarily, the shoes of the child Jesus were constantly replaced but were soiled once again. The people of Atocha interpreted this as a sign that the infant Jesus went out every night to help those in need which later developed into a devotional Roman Catholic practice. 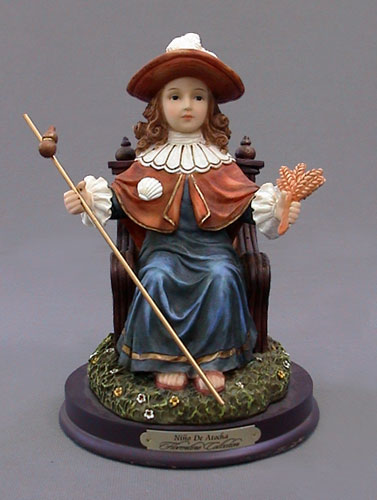 The Holy Child of Atocha is depicted dressed as a boy pilgrim. He wears a hat and a very ornate cloak and holds a basket full of bread in one hand and a pilgrim’s staff in the other. In art, the Holy Child’s basket is sometimes shown empty, giving the impression that he has been out serving the needy; instead it is always filled with flowers. Also, his pilgrim’s staff is often depicted with a water gourd fastened to it.

A shell pattern called the Shell of Saint James is often depicted on the cape on his outfit. This identifies with the many Christians who fled from the Moors. The St. James Shell is also a symbol of the pilgrims to the Shrine of Santiago de Compostela in northwestern Spain.

We visited the chapel in Chimayó, where the custom is to leave him baby shoes. 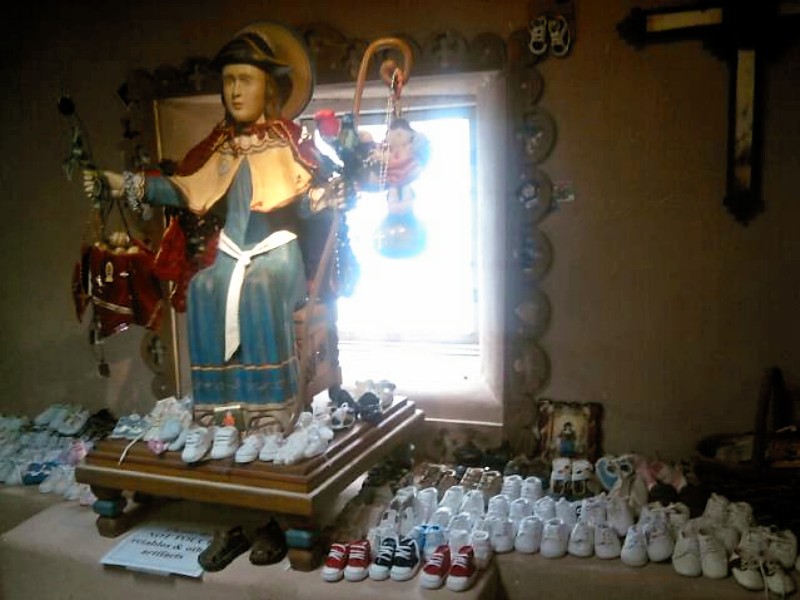 I love popular Catholicism. It drives the liturgists crazy.