Several people here and elsewhere have criticized Archbishop Gomez, He has been in charge of the Los Angles archdiocese for two years – why did he wait until now to do anything, as Mahony himself asked.

My guess is that events passed something like this:

When Gomez began archbishop, it took him a while to assimilate what had happened. He had enormous new duties as archbishop, the paper trail ran to tens of thousands of pages, and the leftover staff from Mahony’s years was not in a  hurry to point out how compromising the documents were.

When Gomez realized what had happened, he knew he had to do two things: release the documents and rebuke Mahony.

They had to be done simultaneously.

He could not release the documents without rebuking Mahony –  that is clear.

He could not rebuke Mahoney without releasing the documents, because Mahony and his defenders would claim that Gomez’ s actions were not justified by the evidence.

But he could not rebuke Mahony publicly without getting the Vatican’s consent – and that would take time and negotiation.

In the meanwhile he had to let the lawyers continue their legal maneuvers so that the documents would not be released without a simultaneous rebuke of Mahony.

As soon as he had Vatican consent, Gomez released the documents and rebuked Mahony – that is all that Gomez himself could do.

That is my guess about how things developed.

What Mahony Should Hear

On rare occasions the clerical vetting system fails and a Christian becomes a bishop or even a pope.

A Catholic Christian knows the gravity of sin and the necessity of repentance, which includes doing penance to expiate sin.

If Archbishop Gomez were a Christian, he would first privately and then publicly address Cardinal Mahony in terms such as these:

My dear brother, I fear for your salvation and I do not want to see you burn forever in the fires of hell, alienated from God, condemned by the voices of the abused children whose bodies and souls you allowed to be ruined.

You must immediately and publicly repent.

Send your cardinal’s hat back to the pope. Resign your priesthood. It is better to enter into life a layman than to be cast with a cardinal’s robes into Gehenna.

Become a lay bother at a poor monastery. Take the humblest jobs, cleaning the toilets and shoveling the stables. Spend every other moment on your knees until they are bloody, begging God to forgive you and not cast you into hell.

Tell the state that you will tell them everything and accept any punishment that they give you. Accept imprisonment and what you know probably awaits you in prison.

Perhaps the Lord will relent and will spare you. My dear brother, I pray that you repent before  death, which comes to every man, and no one knows the day or hour.

So Gomez would speak if he were a Christian and not an ecclesiastical bureaucrat – something the Vatican does its best to prevent. 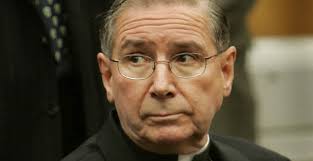