Mass on the Camino

I tried to go to mass every evening on the Camino. Most churches have evening masses for the pilgrims. Oddly enough, Sunday was the hard day – the sole village mass was in the morning and there was no mass in the evening. But 9 days out of 10 I was able to go to mass.

Most of the masses were standard parish masses with a pilgrim blessing at the end. Spaniards, like Americans, race through the mass, and often begin saying the responses before the priest finishes the verse. TheLordbewandalsowithyou ElSeñorestéconvosycontuespiritu. I wish people would slow down. It’s not a race.

A few masses stand out.

The night before I began walking I went to the church in St. Jean Pied de Port in France. I sat down and opened the missal, and discovered it was in French and Basque. “Lord, please let the mass not be in Basque,” I prayed. Basque is a unique language (some theorize it is the language of the Cro-Magnons who were pushed back into the Pyrenees when the Indo-Europeans arrived) and there is not a single cognate to any other language. Fortunately the mass was in French, so I could follow along.

Many pilgrims begin their pilgrimage at Roncesvalles, with all its associations with Charlemagne and the Song of Roland, and almost everyone was at the mass. The large and beautiful Romanesque church there has a baldachin with a stature of the Virgin and Child. It was the feast of St. Matthew, so the five priests were vested in red. They chanted Vespers before mass. At the end of the mass the celebrant gave the pilgrim blessing in the languages of the pilgrims, including, to my surprise, Japanese. He not only said the words in Japanese, but used Japanese gestures. Then all the lights were turned out except for the light on the Virgin and Child and we sang the Salve Regina in Latin.

A few towns later I came to a low point in the liturgy. The church was dedicated to Santiago, and advertised a pilgrim blessing. The priest go though the entire mass in 15 minutes (I timed him) and walked off without giving the blessing. I did not understand a word and the pilgrims were disappointed. He was obviously tired or saying mass and wanted to get it over with as soon as possible.

But then in the monastery of Benedictine nuns in Leon, the nuns sang the office and the mass in Spanish, but using the old Gregorian tones. Even more impressive was the deliberate speed of the mass. After everything the priest said, there was a pause perhaps 2 or 3 seconds before the nuns said the response. El Señor esté con vosotros. (long pause) Y con tu espíritu. It gave dignity and produced a profound meditative atmosphere – the practice adds only a minute or so to the entire mass, and could be adopted in parishes.

Another priest organized a separate service immediately after mass for pilgrims. He had the pilgrims read the same passage in each of their languages, including Hungarian.

My first full day of hiking in Galicia was a day of driving rain and heavy wind. I was soaked and cold, but decided to go mass. The Romanesque church was black with mold, chilly, and damp. The priest invited us all to come into the sanctuary and sit around the altar. We had all been sharing the Camino with cows and horses, and the smell of our wet boots gave testimony to that as we sat around the altar with its flickering candles. A Brazilian pilgrim started shivering, and the priest went back into the sacristy and got his coat for her. His liturgy was a little bit inventive, but perhaps there are special masses for the Camino. He was funny too, and he said that at the sign of peace we should do more than hold the tips of our neighbor’s fingers. We all gave one another big abrazos in a dozen languages.

And then there was the mass of Todos los Santos – All Saints – in Santiago. We arrived at 11 AM for the noon mass and the pews were already full. The cathedral continued to fill up. Parents brought numerous children, some of whom sat on the base of a pillars and played cards while waiting for mass to start. (There is a statue in a Camino church of St. Anthony playing cards with the child Jesus.) Then the mass began. Men in velvet robes played krumhorns and trumpets in the procession that carried the image of Santiago around the aisles.

Music has always been very important on the Camino. The elders of the apocalypse on the tympana of Camino churches are shown playing musical instruments (including the Galician bagpipe). The choir began singing like angels, and the botafumiero was set in motion.

Pilgrims who had timed themselves to arrive at noon began circulating through the church in their hiking clothes. The cathedral was full and overfull and still people entered, and they were welcome. It was the most wonderful mass I have ever been to, worth walking 500 miles to experience, and more than a little, I hope, a foretaste of the liturgy with all the saints that will go on forever. 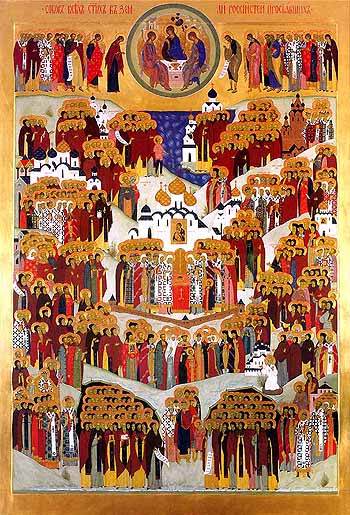 There was the Priest, the Rabbi, and the Minister…

Priests who crack jokes during the Divine Liturgy are on my little list, and none of them will be missed. I know that priests have long been given the bad advice to begin the sermon with a joke to crack the ice with the congregation – but a sermon is not public speaking at a banquet, and the jokes usually fall flat. Even worse are those who make jokes throughout the liturgy.

A friend attended Palm Sunday serves; the celebrant began mass by saying ho much he enjoyed Holy Week and Paschaltide because he got to smack people in the face with water. My friend shared my reaction: Just the way to begin the week when we remember the death through torture of the Son of God and his conquest of Satan for the salvation of the Human race – a lame joke.

Some bishops share my reaction. The Sydney Morning Herald reports:

LAUGHTER may be the best medicine, but God is no joke, according to an Anglican bishop who has chided Christian church leaders who think of themselves as stand-up comedians and resort to making jokes during sermons.

The Bishop of South Sydney, Robert Forsyth, says there is nothing funny in “lame-fisted attempts” to crack jokes and be funny during services and church meetings. Humour has its place, but God and church, he says, is no laughing matter.

“I am frankly sick of ‘leaders’ ruining the atmosphere of the meeting/service and disrupting the focus on God with half-baked comic lines,” he wrote for a Sydney Anglican online ministry resource guide. “Or they detract from my reflection upon some important point made in the sermon with smart cracks or attempts to make funny comments about the preacher or the sermon.”

Another bishop feels the same way:

Sydney’s Catholic Auxiliary Bishop, Bishop Julian Porteous, agreed with the sentiment, saying that Mass was not the venue for the priest to indulge his own personality.

“A religious ceremony, for Catholics a Mass, is a sacred event, and therefore the whole context of celebration should be one that engenders respect, appreciation of the divine and a whole sense of reverence for holy things – that is always got to be the ground in which a priest approaches his duties.

“There has been a tendency for people to feel a joke at the end of the Mass is something to leave people with a smile, but I personally don’t think it is appropriate.”

Preserving the dignity of the occasion should be uppermost in the mind of a priest. “There can be place for a comment which may be a truth or insight into the foibles of humanity, but jokes, if they are corny and self-serving, are inappropriate.”

Now if they could only get priests to stop acting like Vegas MCs.