Trick Me Once Shame on You, Trick Me Twice…

Roman Polanski promised and crossed his heart and hoped to die that he would not leave Switzerland if he were let out of jail. He would wait patiently to see whether he would be extradited to the U.S. where he would be put in prison in uncomfortable circumstances. He would under no circumstances consider crossing the border into France which does not extradite its citizens. Polanski is a French citizen.

A Swiss court, remembering that another court had heard a similar promise, said, no deal.

Or as Le Monde puts it more elegantly:

The Repentance of Polanski

Michael Deacon unearthed Polanski comments about the crime he committed:

When the controversy dies down, the Swiss will probably let him go quietly. And Polanski will make the circle of fashionable dinner parties in Europe, and probably get invited to the Élysée. He and his hosts will exchange reminiscences of the pleasures they had with young teenagers, and lament how barbaric and vengeful Americans are. Perhaps Bishop Lahey can be invited to say grace.

Polanski and the Beautiful People

If I may quote from my 1998 book Sacrilege: Sexual Abuse in the Catholic Church:

Both literary critics for whom transgressive is a word of praise and whose hero is the Marquis de Sade, and psychologists who desire an ever-expanding field of sexual; liberation put forward the idea that sex with boys is the next area to escape from repression. The media horror at the exposure of the sexual abuse of minors by Catholic priests has not been entirely convincing. Both advertisements and entertainment sexualize teenagers, and critics continue to praise Roman Polanski, who cannot enter the United States because of an outstanding charge of child molestation against him, but who received the Palme d’Or at the Cannes Festival in 2002. (pp. 339-40)

In fact it was not a charge, but a conviction. He pleaded guilty.

The reaction to his recent arrest has been instructive. Clearly the Beautiful People think that they are above the law, and are astonished that it is being applied to Polanski. These BCBG Europeans think that the arrest is another demonstration of Bush-era American redneck prudery. The Dutch have long complained about how the FBI has encouraged the Dutch police to enforce laws against child pornography.

For many decades the idea that punishment is the propose of punishment has been rejected. The law imprisons criminals to keep them from committing further crimes or to rehabilitate them, but not to punish them. The idea that punishment is demanded by justice of increasingly foreign to the chattering classes, especially in Europe. American prison sentences are draconian by European standards, and some American states still execute the worst criminals. Europeans find this barbaric – and Europeans staff the Vatican, which I think in part explains the ho-hum attitude the Vatican has taken to the sexual abuse of children.

The reaction of the little people in Europe has been different. The blogs and letters to the editor  have strongly come out against Polanski and in favor of his arrest, which demonstrates that not even the rich are above the law. But the European rich think they are above the law, that the law is for the little people, not for them. This attitude is a relic of the Ancien Regime which still persists in European class attitudes. 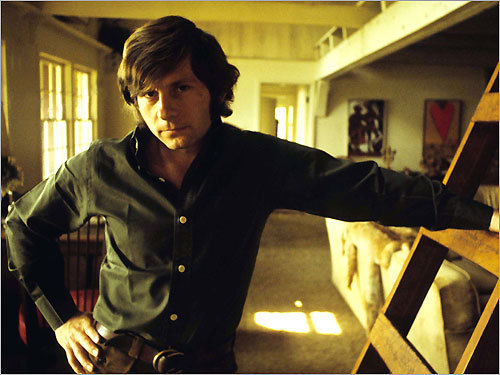 One of the few legitimate complaints about the way the press has handled the clericals sex abuse accusations is that there is a double standard for clerical and non-clerical abusers.

Roman Polanski fled the United States after being accused of having intercourse with a 13-year-old girl. He admitted the act, but said he didn’t know she was only 13. He has never returned to the U.S., but has had a successful career and received an Oscar in 2002 for The Pianist.

He wants his case to be heard in absentia, according to the AP. The victim wants him to appear before the court, and the court has refused to have a trial when he has fled justice and it has no control over his person.

Walgren said little has changed legally since the day in 1978 when Polanski failed to appear in a Santa Monica courtroom for sentencing.

“The defendant ignored a lawful and valid court order to appear in court and instead chose to flee to the comforts of France,” he said.

“It would be a farce for this court to review the case when it has no jurisdiction over the defendant,” the prosecutor said.

Walgren argued that allowing such a hearing would violate the basic principle of the fugitive disentitlement doctrine, that “a fugitive from justice has no right to ask the court to review the very judgment that the fugitive flouts.”

As for the victim’s right to speak, Walgren concluded: “Until such time that the defendant submits to this court’s jurisdiction and the court holds a hearing, the time is not ripe for the victim, either personally or through her attorney, to be heard in court.”

There is no outcry that the arts community has honored an admitted child-molester.