The Ordinariate of the Chair of St. Peter

The Common, Proper and Dies Irae will be in plainchant

Here is the Latin Dies Irae

Jesus son of Mary was written by Edmund Stuart Palmer (1856–1931) in Swahili as ‘Yesu Bin Mariamu’ sometime before 1901, for the Requiem of a colleague. Palmer was a doctor and Anglican cleric who preached and practiced medicine in Zanzibar and East Africa.

Here is the tune we will use ADORO DEVOTE.

Here is the choir of All Saints with the original tune for the Swahili hymn.

Abide with me was written by the Scottish Anglican clergyman Henry Francis Lyte (1793–1847). The hymn is based on Luke 24:29, part of a post-Resurrection narrative telling the story of Emmaus: “But they constrained him, saying, Abide with us: for it is toward evening, and the day is far spent. And he went in to tarry with them.”  Lyte takes the quotation and turns it into a metaphor for human life in all of its brevity. At the same time, by changing ‘Abide with us’ into ‘Abide with me,’ he deepens the feeling by making it speak to the individual, in prayer or meditation. It is perhaps the personal intensity of the text, the use of the metaphor of evening and the closing line, “In life, in death, O Lord, abide with me,” that makes this hymn a favorite at requiems.

The tune of the Dies Irae is used scores, probably hundreds of times, in classical music. As the themes of Death, Judgement, and Wrath have been softened or have disappeared from mainline Christianity, the Dies Irae has become more and more prominent in popular culture. Death is dreadful, and there is no escape, as we all, believers and non-believers, deep down know.

A Musical History of Death: “Exit Music” by Tom Allen Scott Thybony writes about his journey around the Four Corners in search of a place that was once on a map: Burntwater. Within the story of that journey he tells the story of his other journeys, his search for the Hopi Sun Chief, his visit to a kiva during a kachina dance, his Good Friday pilgrimage from Santa Fe to Chimayo, his search for the spot in the Grand Canyon where his brother had died when the helicopter he was piloting was hit by a small plane.

Like the desert landscape, Burntwater deals with the elemental facts: love and suffering and survival and death. The desert is spirit haunted and is heartbreakingly beautiful – the beauty of the desert, like the beauty of life, will break your heart. Beauty is not for the weak; the most beautiful thing in the world is the Cross, the utter-self emptying of the Creator, who tasted death for all his creatures.

I don’t know the status of Thybony’s beliefs, but he senses that his life is being shaped so that it manifests hozho, the Navaho concept of beauty, but a beauty that incorporates suffering and death. I would call it Providence or the Holy Spirit, the sacred fire from which all reality springs and to which all returns. But the name is less important than the reality.

The Hopi know that life is like this, the Navajo know it, the Penitentes know it – but so much of modern Christianity is sentimental and vacuous and superficial.

If you still need reading for Passion Week, I would recommend Burntwater. 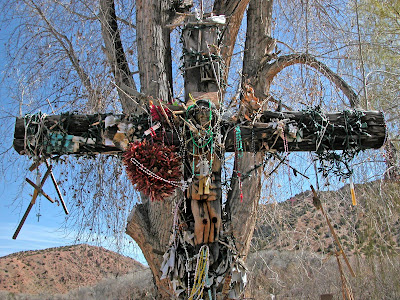 More on the Death Saint

The faithful followers of Santa Muerte, the Death Saint, are unhappy that the government destroyed the shrines they had built on public land (see blog below).

One bishop, according to the Washington Post, agreed with them

But the destruction enraged Death Saint church leaders, including archbishop David Romo who in a homily Sunday called on followers across Mexico to hold demonstrations against the demolitions.

“It was both an open act of religious intolerance and an act of arrogance,” Romo said. “We are entering a stage of religious and governmental terrorism.”

He called on followers to stage protest marches during Easter week, including a potentially provocative Easter Sunday march to the Basilica of the Virgin of Guadalupe, the country’s widely-revered Roman Catholic patroness.

A previous report indicated that he said

“We are being persecuted,” said Catholic Bishop David Romo, who has become the black sheep of Mexico’s Catholic church for leading services to the bejeweled, scythe-wielding Santa Muerte, or Saint Death, in the rough Mexico City neighborhood of Tepito.

However Romo, despite inaccurate news reports, is not a Catholic, but rather a self-styled bishop of a traditionalist church, whose traditionalism seems to include pagan worship (Spero):

Cult spokesman David Romo Guillén, who styles himself as a bishop,[of] “The Mexico-US Tridentine Catholic Church” or “The Traditional Catholic Mex-USA Church.”

Mexico has native religious beliefs that pre-date the 1521 Spanish conquest and the arrival of the Catholic faith. Aztec and Mayan art and imagery are replete with images of death in the form of skull-adorned temples and deathly idols. Human sacrifice was offered by Mexicans’ ancestors to placate pagan gods and ensure the fertility of the earth. Before the Conquest, as many as 60,000 human lives were offered to the Aztec deities in as little as four days. That cult of death was sometimes personified by “Mictlantecuhtli” – a god who is represented as a skeleton or flayed man. Mass baptisms of Native Americans and catechisms in native languages offered by the first Spanish missionaries in the 1500s were not enough to wipe away generations of non-Christian, non-Western beliefs.

The real Catholic archdiocese has a different take:

Hugo Valdemar Romero, spokesman for the Archdiocese of Mexico, said the Roman Catholic Church was in no way involved in the demolitions. But he added that “it is no secret that this (Saint Death) religious organization is associated with drug traffickers and organized crime … it is not only superstitious, but diabolical.”

Romero has previously admitted the Catholic Church was in part at fault:

Lamenting the failure the Catholic Church has had in adequately addressing the needs of his flock, a spokesman for the Archdiocese of Mexico City said last month that “Catholics are easy prey for the snares of imposters because of the deficient evangelization and religious formation we (the hierarchy) have provided to the faithful.”

Elementary Christian doctrine is a protection against superstition, whether in Mexico, Africa, or the United States (although our superstitions, e. g. Reiki, are not as colorful).

The Death of Children

January 28, 2009 in death, Uncategorized No Comments Tags: death of children, prayer for dead

The Theotokos, Joy of All Who Sorrow

The son of a friend of mine died after a long struggle with childhood leukemia.

I awoke in the middle of the night, went to my bookcase, and found a book of Akathists. I read the Akathist for the Repose of the Departed.

It includes these prayers and reflections:

Enlightened by the illumination of the All-highest, Saint Macarius heard a voice from a pagan skull: When you pray for those suffering in Hades, then there is comfort for the heathen. O wondrous power of Christian prayer, by which even the nether regions are illumined! Both believers and unbelievers receive consolation when we cry for the whole world: Alleluia!

The words of Isaac the Syrian are recalled: the heart of the merciful offers prayers with tears every hour for people and animals and all creation, that they may be preserved and purified.

We are to blame for the calamities in the world, for the sufferings of dumb creatures and for the diseases and torments of blameless children, for through the fall of man the beatitude and beauty of all creation have been marred.

O Lord of unutterable love, remember Thy servants who have fallen asleep!