The archival project with which I am associated, BishopAccountability, is collecting all documents, articles, legal cases, and other material, associated with sexual abuse by clerics in the United States. We have close to a million pages of documents now, and will probaly end up with 3 to 5 million pages.

No one else is collecting this material. No one else, as far as we know, has a list of the names of every priest accused of sexual abuse in the United States, much less the documentation of the abuse and how the bishops handled or, almost always, mishandled, the abuse. No one – not the American bishops, not the Vatican, not any governmental or law enforcement agency – has the documentation that is essential to understanding how abuse flourished so long among the Catholic clergy.

The violence that drug cartels are inflicting on Mexico is also not documented. The government  in Mexico can scarcely be trusted to paint a realistic picture, and no governmental agency in the United States seems to be keeping track of what is happening on our southern border – except for one  librarian in Las Cruces, New Mexico.

Ms. Molloy, a 54-year-old librarian at New Mexico State University here, spends most mornings sifting reports in the Mexican press to create a tally of drug-cartel-related killings in Ciudad Juárez, Mexico. She is striving to fill a widening information gap about these homicides in Juárez, some 50 miles southeast of Las Cruces, across the Rio Grande from El Paso, Texas.

There is no official count of the people killed in Mexico’s escalating drug wars—whether the victims are drug traffickers, police or civilians. A government estimate puts the total at about 22,000 in all of Mexico since late 2006.

For Juárez, Mexico’s deadliest city, state officials keep their own tally, but the swift pace of the killings, as well as distrust of authorities, has prompted reporters and such observers as Ms. Molloy to keep their own counts.

Some Americans who attempted to count the killings were overwhelmed by the carnage and gave up. But Ms. Molloy perseveres. The death toll has risen above a thousand in Juárez so far this year, according to her count.

“I don’t think there’s a phenomenon like that in the world unless it’s a declared war,” she said.

Mexican government officials say they aren’t deliberately withholding information on the killings. They say determining which homicides are linked to criminal gangs involves lengthy investigations and a level of coordination among various agencies that isn’t automatic.

Ms. Molloy tallies their reports and makes her findings available for free to anyone who wants them. Her material is used in news accounts and scholarly studies in the U.S. and beyond, as universities and some U.S. newspapers curtail travel in Mexico because of concerns about the violence.

More than 300 people subscribe to Ms. Molloy’s daily news and analysis emails, including congressional staff, U.S. and Mexican human-rights watchdogs, local and international reporters, and border observers from as far away as Norway.

Like BishopAccountability, Ms. Molloy wants her work to be of permanent value:

Ms. Molloy said her long-term plan is to build a more comprehensive archive at her university’s library to document Juárez’s bloody years. She hopes future readers will be able to track, in the news clippings, longstanding problems she and other scholars believe are contributing to today’s violence: the migration of poor workers from Mexico’s interior searching for manufacturing jobs; the growth of shanty towns; and more recently, a generation of uneducated youth lured by the gangster lifestyle.

“Ten years from now, people are going to ask ‘What happened in Juárez?’ ” Ms. Molloy said.

And ten, twenty, a hundred years from now, people will be asking “What happened in the Catholic Church?” The BishopAccountability archive will have the clues, the documents, the records, without which it will be impossible to answer that question.

(The costs are daunting. If you know anyone who has a lot of spare change, head them in our direction).

The New York Times has described the new cooperation between the Unites States and Mexico in combating the drug trade. What the Times (perhaps wisely) did not mention is that the narcotraficantes are popular in Mexico, at least in some areas.

Popular Catholicism, as Arturo Vasquez reminds us in his blog Reditus, has some unusual saints. I earlier blogged about Santa Muerte, and he has a selection from Time about the veneration of Ismealito, a “holy” thug. Like many Latin countries, Venezuela suffers from violence.

Many Venezuelans have responded by entrusting themselves to a group of dead “saints” who had lived delinquent lives. Ismaelito and other santos malandros such as Petroleo Crudo (Crude Oil), El Raton (The Mouse), La Malandra Isabelita, Machera and countless others were petty criminals in the 1960s and ’70s. Most, if not all, are said to have died brutally at the hands of the police. But, like sinful ghosts trying to escape purgatory if not hell, they are all believed to have gained some form of redemption through favors and deeds attributed to them by their believers.

There is no doubt in his devotees’ minds, for example, that Ismaelito, the king of the holy thugs, was a thief and one of the most wanted crooks of his time. Still, among many who knew him when he lived, he’s considered more of a Robin Hood than a criminal. In El Guarataro, a shantytown in southeastern Caracas, those who knew him remember the time he raided a meat delivery truck and shared the bounty among his neighbors

La Familia in Mexico, according to La Prensa (Buenos Aires) is following in his footsteps.

It gives out Bibles to the poor at the foot of the hills of the state of Michoacán, It prohibits the use of drugs, it builds schools and sewers and declares itself the protector of women and children. But it is not a religious group: it is La Familia Michoacana, the most recet of the bands of Mexican drug dealers who now reign over the traffic in methamphetamines of the country. It began as a group of self-declared vigilantes who did “the work of God,” it is now the most violent criminal group of the nation

It is not the most powerful cartel in Mexico but it is possibly the most brutal. The group made itself famous in September 2006 when it threw five human heads on to a dance floor in Uruapan with a message that said: “La Familia does not kill for money, it only kills those who deserve to die.”

Gangsters by day, the members of La Familia have to follow a strict moral code when they return home. It is said that they obey a bible written by their leader, Nazario Moreno, nicknames The Crazy. They usually recruit young men in the rehabilitation centers for alcoholics and drug addicts, and  help them overcome addictions and change themselves into “good family men.”

The Followers of St. Death 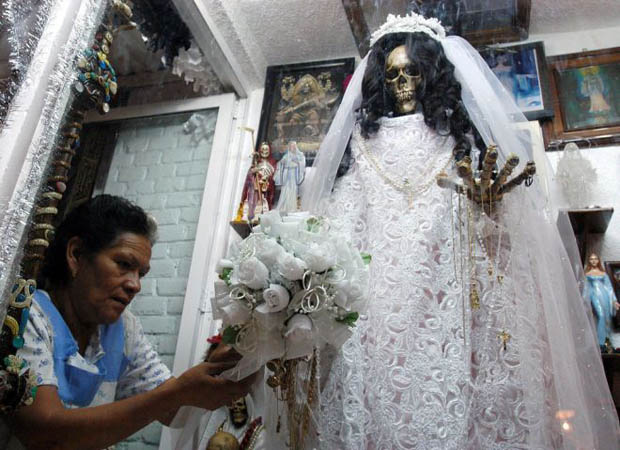 Sometimes one wonders about absolute freedom of religion:

Father Hugo Valdemar, spokesman of the Archdiocese of Mexico City, warned this week about the “terrorist” nature of the call for a “holy war” against the Catholic Church by the leader of followers of “St. Death.”

David Romo Guillen, leader of the devotion to “St. Death,” especially popular among drug traffickers and criminals, called for a “holy war” against the Catholic Church after the Mexican Army destroyed several places of worship it suspected to be criminal hideouts, especially in the northern part of the country.

“Only terrorist or fundamentalist leaders call for holy wars, like Bin Laden or the Taliban. It’s a shame that Mr. Romo makes himself equal to the Taliban or a terrorist by calling for a holy war,” said Father Valdemar. After the destruction of the suspected hideouts, Romo blamed the military’s actions on the Catholic Church, because several bishops had warned against the devotion and called it un-Christian.

This Monday, the followers of St. Death, led by David Romo, protested outside the Cathedral of Mexico City, bearing pictures of the “White Child,” the name they have given to St. Death, represented by a skeleton dressed in a white tunic or sometimes in a wedding gown.

More on the Death Saint

The faithful followers of Santa Muerte, the Death Saint, are unhappy that the government destroyed the shrines they had built on public land (see blog below).

One bishop, according to the Washington Post, agreed with them

But the destruction enraged Death Saint church leaders, including archbishop David Romo who in a homily Sunday called on followers across Mexico to hold demonstrations against the demolitions.

“It was both an open act of religious intolerance and an act of arrogance,” Romo said. “We are entering a stage of religious and governmental terrorism.”

He called on followers to stage protest marches during Easter week, including a potentially provocative Easter Sunday march to the Basilica of the Virgin of Guadalupe, the country’s widely-revered Roman Catholic patroness.

A previous report indicated that he said

“We are being persecuted,” said Catholic Bishop David Romo, who has become the black sheep of Mexico’s Catholic church for leading services to the bejeweled, scythe-wielding Santa Muerte, or Saint Death, in the rough Mexico City neighborhood of Tepito.

However Romo, despite inaccurate news reports, is not a Catholic, but rather a self-styled bishop of a traditionalist church, whose traditionalism seems to include pagan worship (Spero):

Cult spokesman David Romo Guillén, who styles himself as a bishop,[of] “The Mexico-US Tridentine Catholic Church” or “The Traditional Catholic Mex-USA Church.”

Mexico has native religious beliefs that pre-date the 1521 Spanish conquest and the arrival of the Catholic faith. Aztec and Mayan art and imagery are replete with images of death in the form of skull-adorned temples and deathly idols. Human sacrifice was offered by Mexicans’ ancestors to placate pagan gods and ensure the fertility of the earth. Before the Conquest, as many as 60,000 human lives were offered to the Aztec deities in as little as four days. That cult of death was sometimes personified by “Mictlantecuhtli” – a god who is represented as a skeleton or flayed man. Mass baptisms of Native Americans and catechisms in native languages offered by the first Spanish missionaries in the 1500s were not enough to wipe away generations of non-Christian, non-Western beliefs.

The real Catholic archdiocese has a different take:

Hugo Valdemar Romero, spokesman for the Archdiocese of Mexico, said the Roman Catholic Church was in no way involved in the demolitions. But he added that “it is no secret that this (Saint Death) religious organization is associated with drug traffickers and organized crime … it is not only superstitious, but diabolical.”

Romero has previously admitted the Catholic Church was in part at fault:

Lamenting the failure the Catholic Church has had in adequately addressing the needs of his flock, a spokesman for the Archdiocese of Mexico City said last month that “Catholics are easy prey for the snares of imposters because of the deficient evangelization and religious formation we (the hierarchy) have provided to the faithful.”

Elementary Christian doctrine is a protection against superstition, whether in Mexico, Africa, or the United States (although our superstitions, e. g. Reiki, are not as colorful).