There Are More Things in Heaven and Earth

Arturo Vasquez over at the ever-fascinating Reditus spends a great deal of time, perhaps a little too much, in the curious corners of Catholicism, or perhaps semi-Catholicism: the bandit saints, popularly-canonized dogs, curanderos, Hermeticism, etc. I love it. He posited one explanation for his identity:

3. Arturo Vasquez is a witch: We are surprised that people don’t make this accusation more often, because this is the one that would stick the best. “Behind all of his piety, and pretensions of traditionalism, Arturo uses his large basement for spells and other dark works. That is why he posts all of those questionable prayers, pictures of folk saints, and essays on Renaissance magic on his blog: to promote his business as a Tarot card reader and curandero.” “Yeah, I’ve seen him. Arturo was hustling on a street corner and offered to read my palm and put a curse on my ex-boyfriend for dumping me for my best friend.” “Arturo said he would cure my kid of the evil eye but instead made his skin turn purple. And the poor child can’t stop singing Prince songs.” “Arturo turned half of the members of the Ladies Altar Guild Wiccan.” And so forth. If there was still an Inquisition, he would be the first burned at the stake if his critics were Dominicans with a huge axe to grind.

Dwight Longenecker, Anglican-turned-Catholic, would seem to be at the opposite pole from Vasquez, but he comments upon modern liberal religion:

Religion, if it is religion at all, is surely about man’s commerce with the supernatural realm. In this sense Paganism is a real religion. A priest sacrificing chickens or virgins to a monstrous deity in hope of supernatural protection and power is what I call religion. An animist, high on the fermented juice of the tropical tree, dancing around the campfire and cutting himself to satisfy the spirit of the river is a real religion. So is a Buddhist monk sitting in a snowdrift in his underpants humming his mantra and transcending the cold. For that matter, even the Mormon baptizing someone for the dead or a televangelist praying down the Holy Spirit fire to heal, mightily heal is practicing real religion. It may be a false or misguided religion, but at least it is religion.

All of this is in contrast to the milk and water that much of mainstream modern Christianity has become in most Western cultures. There is no religion there because the modernists no longer believe in the supernatural.

When I was a guest of the Hopis, it was clear they really believe in the kachinas, the spirits that mediate between us and the Creator. They hope to become a kachina when they die and bring God’s blessings, especially rain, to their people.

Some say the American South is, or at least used to be, not exactly God-centered, but God-haunted. For me, and for many, the American Southwest is spirit-haunted. The veil between this world and the next is very thin in the desert. And the Hopis and the Navajos and the others know that the spirits are not effeminate semi-males with wings, but fearful, even when they are friendly. 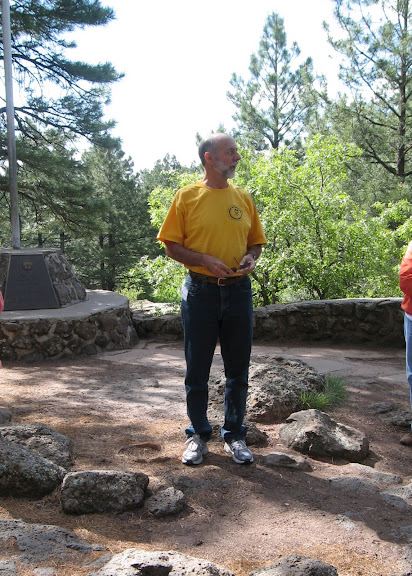 Maidie and I went on a Kachina tour of Arizona, under the aegis of Crow Canyon and under the leadership of the archeologist Chuck Adams (above), who has worked on the Hopi mesas for thirty years. We started off in Phoenix at the Heard Museum, and then went up to Flagstaff, to the Museum of Northern Arizona, where we were joined by Michael Kabotie, a Hopi artist. Chuck and Michael gave us a tour of the museum and of the mural that Michael has painted in imitation of a kiva. 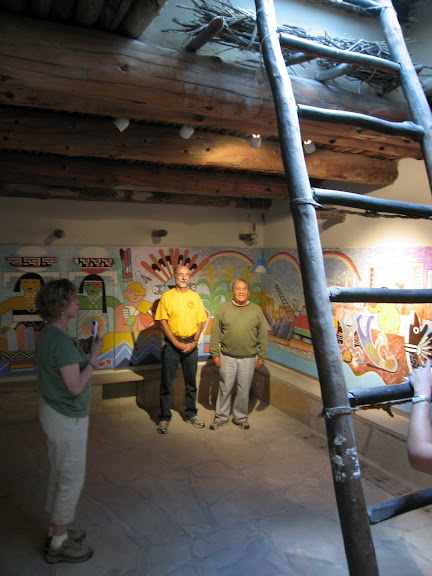 The mural reads from left to right. On the right, through the rungs of the ladder, you can see some of the problems of the modern Hopi: alcoholism, diabetes, drug usage, and suicide. Michael himself, as he explained, at one point was a down-and-out alcoholic. But his kachina spoke to him, not so much in words as in feelings and ideas. Michael is in recovery, and an extraordinary artist. Here is one of his rings:

We then visited the ruins at Homol’ovi, which Chuck Adams had helped excavate. 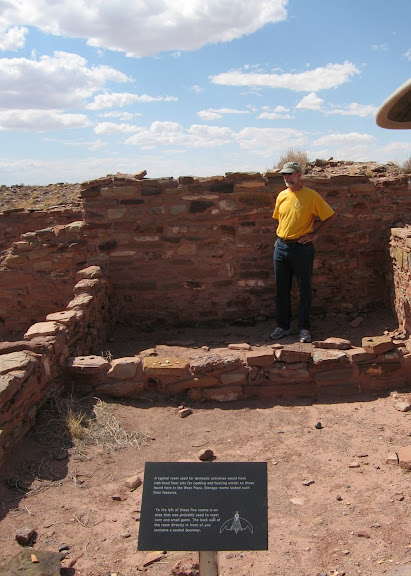 Below Homol’ovi were rock art panels, one of which showed a kachina. 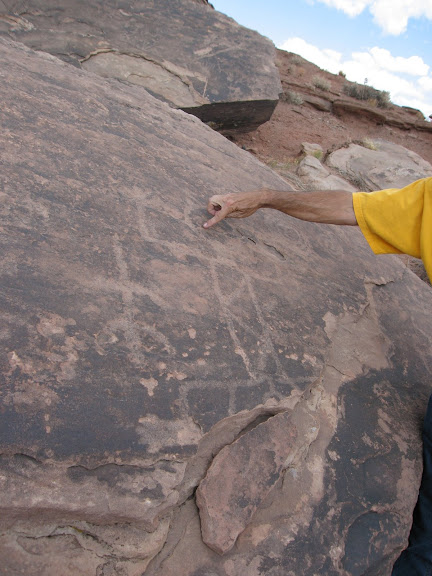 From there we drive north through dust devils and Navajo country to reach the mesas where the Hopis live. We stayed at the Cultural Center, which has an inn attached. 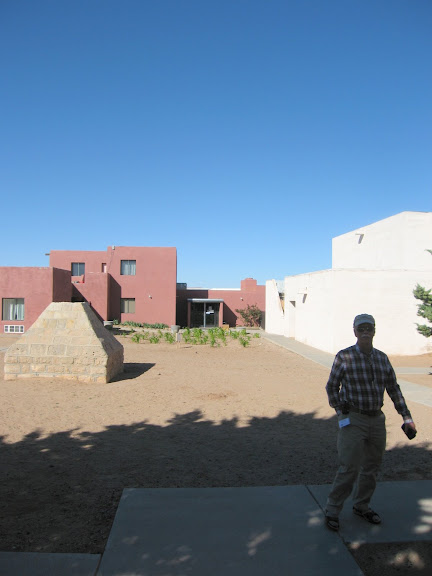 One of our local guides Micah Loma’omvaya, still plants his fields using a digging stick. But he said that only 15% of the arable fields were planted. Other Hopis rely on food stamps, 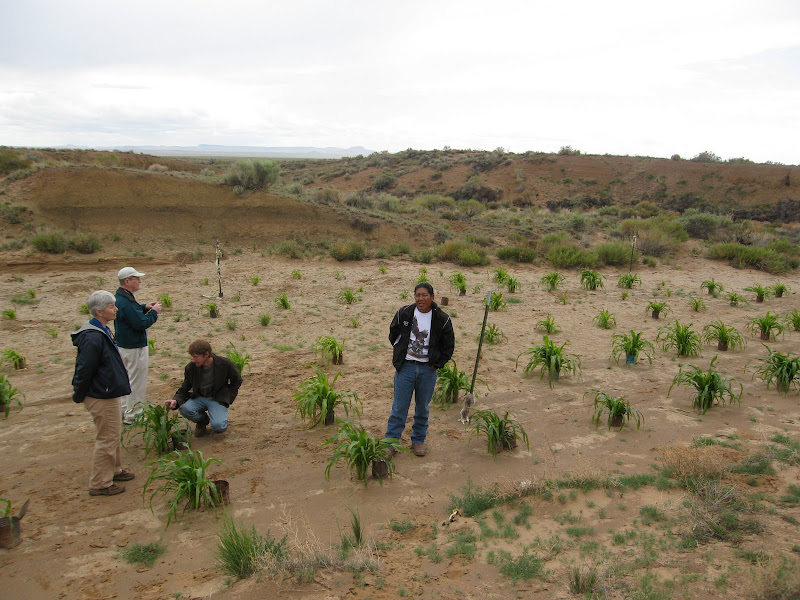 The Hopis were very open about the difficulties that have adjusting to the modern world: alcoholism, poverty, and a weakening of traditions.

One of my hopes has been to see a kachina dance, and we did. The Hopis feel that that cultural heritage has been exploited, so they strictly limit photography in the villages and absolutely forbid it at the dances. The few images I had seen did not prepare me for the dance. I had seen such images as these:

We entered a plaza similar to the one in the first picture and sat in a corner. The plaza was ringed by chairs filled with Hopi women and scores of children. The rooftops were also full of adults and teenagers. There were a handful of Anglos.

We sat for a while (the kachinas dance when they are ready) and then heard a few hoots in the distance. The kachinas, similar to the one in the first image, wearing ruffs of cedar and bells around their legs, started entering the plaza, 3, 5, 15, 25, 50, 100, and they kept coming. They milled around, making turkey-like noises for a while, and then formed a double oval line that filled the plaza. Then the kachinas in the center  started drumming, and all the kachinas started singing and dancing in unison, waving their headdresses and their triangular turquoise wands, and smell of the cedar and the sound of the bells filled the plaza.

They sang and sang and sang and danced and danced and danced. After about twenty minutes the singing stopped and the kachinas started milling around, going to the heap of food in the center of the plaza and starting to give the food to the crowd: candy and doughnuts and cookies and popcorn for the children, and big baskets of groceries for the elderly grandmothers who needed food. Then they started throwing carrots and apples and oranges and cookies into the crowd (my wife was tossed a sweet star biscuit) and to the people on the rooftop. The air was filled with a rain of food. The children, who know these are the real kachinas come down from the clouds, were delighted.

The kachinas reform their double line and do a different dance and song. Their song and their dance is a prayer, for rain and a good harvest and peace and blessings for the Hopis and for all people, black, white, yellow, throughout the world, for Hopiland is the center of the world.

We saw two carved figures, both star beings, but of different colors. They symbolize the male and female principles. We were told that seeing one shooting star was wonderful, but to see two shooting starts go through the sky together and disappear into eternity is even more wonderful. Such are husband and wife, or friend and friend, passing briefly through this word together until they enter eternity.

The Hopis believe that when they die they become kachinas, spirits that carry prayers to the Creator and bring his blessings back to the earth, especially the blessing of rain. The kachinas therefore appear as clouds. A small Hopi child overheard us talking about kachinas and said “There are many kachinas today.” We asked where, and he pointed to the sky which was filled with white puffy clouds.

The Hopis feel their losses, and say that it has been prophesied they will one day lose everything and go on their wanderings again, but it has also been prophesied the kachina dance will be the last thing they lose. May it be many, many years before that happens.