The Slippery Slope in Luxembourg

February 20, 2008 in Medical ethics No Comments

By a vote of 30 to 26 with three abstentions, the parliament of Luxembourg has legalized doctors’ killing of their patients. According to Kathnet:

Doctors, who assist with suicide, under the new law will suffer no legal penalties.

The new head of the German Bishop’s conference, Bishop Zollitsch, has raised a minor fuss in Germany by his comments on celibacy. According to Der Spiegel

The Archbishop of Freiburg and the newly chosen head of the German Bishops’ Conference, Robert Zollitsch pronounced “against the forbidding of thinking” about the matter of celibacy. In an interview with Der Spiegel the 69-year old said that the connection between priesthood and the state of being unmarried is “not theologically necessary.”

For the Catholic Church this statement signifies a radical change from current practice. Zollitsch is conscious of that: a departure from celibacy would be a revolution, with which part of the Church would not go along,” he said Therefore for this a Council would be necessary, because it would be enmeshed in he inner life of the whole Church.”

Other bishops harrumphed and said there were no plans to change the rule of celibacy in the Latin Church. Regennsburg Bishop Gerhard Müller’s comments are however undermined by his failure in judgment in handling a pedophile case, that of Peter Kramer (I will soon post my case study of this matter  on my website).

A novelist, Gabriele Kuby, weighed in and said

Our Church finds itself in free fall. In ten years there will only be half as many priests and believers. Islam grows unceasingly in this country. In this historical moment isn’t there is a lot to be said for strengthening the the Church through unity with the Pope, a German Pope who crieds out the truth to the world and strengthens hope?

1.      Catholics should not be forbidden to think about celibacy.

2.      Celibacy is not theologically necessary to the priesthood. This is of course true; the Eastern Churches have married priests, and the Latin Church has former Episcopal priests who were ordained as Catholic priests and are married.

3.      Any change in the rule if celibacy would be a revolution and would not be accepted by part of the Church. This is also true, and the objectors to Zollitsch’s remarks demonstrate it

4.      Therefore if the rule of celibacy were changed, it should be done only by a General Council (and by implication, not by the pope’s action alone). This would seem to limit the possibility of any change, rather than make it easier.

Those who objected to him said

2.      The question of celibacy for Latin priests is settled and Zollitsch’s remarks  imply it is an open question.

3.      Catholics should follow the lead of the Pope in this matter.

4.      Catholic should be united and disciple to face the problems of the decline of Catholicism and the rise of Islam in Germany.

Creeping infallibility is a problem in the church. Administrative decisions of popes, not to mention those of bishops and priests, are not infallible. If a Catholic after reflection thinks that a policy or decision is harmful to the Church what should he do?

Celibacy is not a matter of dogma; it is a discipline that has created problems, but which in the judgment of many people has served the Latin Church well. Others focus on the problems and would like to see the Eastern discipline introduced in the Latin Church: married men could be ordained, but monks would remain celibate and bishops would be chosen from the ranks of celibate priests.

But the popes have strongly supported the rule of celibacy, and the situation of Catholicism seems to demand a reaffirmation of the marks of Catholic identity rather than further changes.

In my book Sacrilege, I propose that the Eastern Churches throughout the world be allowed to ordain married men (the Irish bishops in the U. S. long ago persuaded the Vatican to limit the Eastern tradition to the historic homeland of Eastern Europe) and that the Eastern Churches be encouraged to plant churches throughout the west. Among other and more important things, this would allow Catholics to see how a married clergy works out in modern society and for the whole church, law and clerical, to decide whether it is a good idea to change the Latin discipline.

For my part, I think it would be better for the Church to have a married clergy and a transcendent liturgy rather than a narcissistic celibate clergy who wear clown wigs and behave like Las Vegas MCs at Mass. Perhaps the prospect of facing a wife’s comments would dampen priests’ enthusiasm for making utter asses of themselves at Mass. 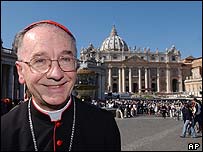 A factoid has taken root in the minds of the Vatican: that less than one percent of Catholic priests have been accused of pedophilia. According to CNA,

The prefect for the Congregation for the Clergy, Cardinal Claudio Hummes, said pedophilia is one of the gravest problems of sexual misconduct, but he asserted that the media exaggerated the number of priests involved in such cases, which in reality involved less than 1% of the clergy.

This is true but irrelevant. The John Jay study established that in the United States at 4.27 % of Catholic diocesan priests and 2.7 % of religious priests have been accused of the abuse of minors. Most of the victims were not indeed pre-pubertal but rather at or over the age of puberty and technically therefore what Hummes says is correct, but the abuse of a 12, 13, or 14 year old is criminal and does enormous harm to the victim.

Hummes is sheltering himself from reality by spreading, not exactly lies, but seriously distorted information.

The Young Male Mind in Argentina

February 15, 2008 in Argentina, Masculinity No Comments

But this guy tried to climb on the iceberg:

Hanna-Barbara Gerl-Falkovitz in the Tagesspost (acknowledgement to Kath.net) has asked that the church consider the possibility of opening the diaconate to women. Gerl-Falkovitz is a professor of the philosophy of religion at the Technical University of Dresden. I have heard her speak at the International Institute of Culture’s seminars in Eichstaett, Germany. She is known for her orthodoxy and loyalty to the magisterium.

She proposes that the Church consider an order of women who had earned true holiness through prayer and service (not through academic degrees). These women would have the special role, mostly in hospitals, of accompanying the sick and dying. They would also under certain circumstances have the ability to give the sacrament of the sick, “unter bestimmten Umständen auch die Krankensalbung zu spenden.”

This latter part of her proposal depends on the decision of the Church as to whether the priest is the ordinary minister of the Sacrament of the Sick (as he is of baptism) or the necessary minister (as he is of the Eucharist). A layperson (and indeed even an unbaptized person) can administer baptism is cases of necessity. I do not believe the question about who can administer the sacrament of the sick has ever been asked. The relevant verse in James seems to limit the sacrament to the elders (πρεσβυτερους – priests) of the Church:

Is anyone among you sick? Then he must call for the elders of the church and they are to pray over him, anointing him with oil in the name of the Lord; and the prayer offered in faith will restore the one who is sick, and the Lord will raise him up, and if he has committed sins, they will be forgiven him.

Venice is the most claimed city in the world : ”Cleveland- The Venice of Northern Ohio!”

Buenos Aires has its Venice, Tigre, built on hundreds of island in the river delta. Most of the houses are modest and un Venetian:

The houses are served by supermarket boats

But here and there is a truly Venetian pile that comes from the time when “Wealthy as an Argentine” was a byword. Center of Weirdness in Buenos Aires

The Recoleta cemetery is perhaps the strangest place I have ever seen.

This city of the dead contains 60,000 bodies in hundred of mausoleums built like row houses. Perhaps the Via Appia in its heyday gave the same impression, but the Via Appia was not in the best neighborhood in Rome.

The monuments are neoclassical On the outside of the Greek Revival gate to the cemetery is Requiescant in pace – May they rest in peace.On the inside of the gate (to be viewed by the dead) is Expectamus Dominum – We await the Lord.

On the Day of Resurrection this place will be as crowded as the gate the Buenos Aires airport. I sure it will be a cheerful chaos, and I hope, as at the airport, everyone finally makes it. Between El Calafate and El Chaten, the only place to eat is La Leona. The food was surprisingly good, as it was everywhere in Argentina.

Here is a puma that came too close to the kitchen: And here is a former guest of the estancia, Butch Cassidy, who stayed there a month after he robbed a bank: Things the Guidebook Doesn’t Tell You

February 10, 2008 in Uncategorized No Comments

My Spanish is not very good, but here is the substance:

Dear Drivers and Travelers:Please be informed that on the road between Guer Aike and El Calafte the personnel of civil defense has detected a plague of spiders commonly known as black widows. We therefore recommend that you not get out of your car and much less open the ventilator windows.

We pulled up our feet, got in our van, and locked the windows.

Murder in the Cathedral

Because of the horrors that Argentina endured under the military dictatorship in the 1970s, it has a special sympathy for other victims of repression.

In the National Cathedral there are two memorials.

One is to the Armenian genocide, when the nationalist Turkish government drove out a million men, women, and children to die in the desert, their bones to bleach in the sun. The Turkish government still refuses to acknowledge any responsibility. The second is pages from Jewish prayer books from synagogues destroyed by the Nazis, from the extermination camps, and from the Jewish institutions bombed with great loss of life, in Buenos Aires. Literary notes on llamas and guanacos

The one-l lama,
He’s a priest.
The two-l llama,
He’s a beast.
And I will bet
A silk pajama
There isn’t any
Three-l lllama.

Also, to call someone a guanaco is an insult. It means he cannot be domesticated; he spits.

Guanacos are a wild member of the llama family. They seem to exist mainly to be eaten by pumas. Our guide had heard that pumas got 90% of  guanacos; he found that hard to believe, but suspected that pumas got half of them.

Sal, a member of our group and a serious photographer (note the camera), is keeping a resepectful distance from the guanaco. Like llamas and camels, they spit.